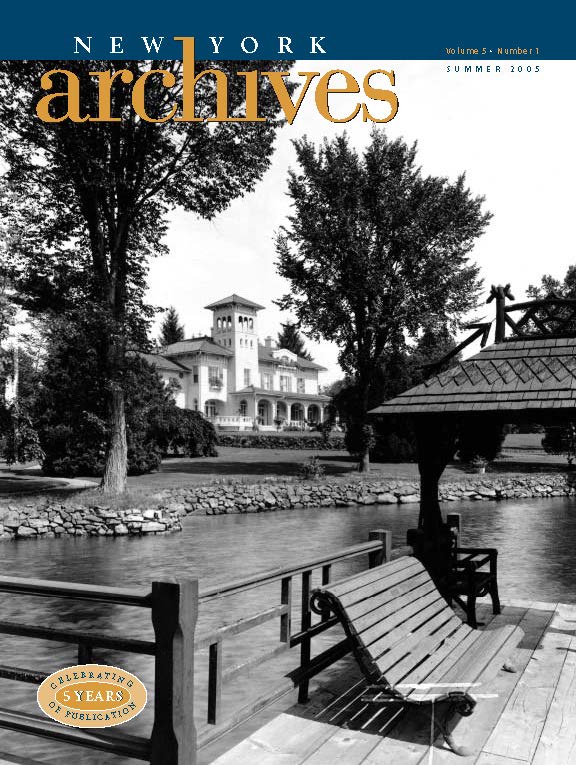 Stories of America
Kathleen D. Roe
The newly appointed Archivist of the United States has stories to tell: his own, and America’s

Citizen vs. Citizen
John Hanna, Jr.
New Netherland’s citizens were disputatious. But the colony’s government laid the framework for arbitration practices that have endured for over 250 years.

“That Others May Live”
Charles F. Howlett
A North Atlantic shipwreck, a dangerous rescue by helicopter—all part of the
historic mission of the New York Air National Guard’s 106th Rescue Wing

“A Superior Lot of Men”
G. William Beardslee
The crack shots of Berdan’s Sharpshooters, many from upstate New York, brought fear to the Confederacy and fame to their regiment during the Civil War

By Tricia A. Barbagallo

The fertile soil of “Black Beach”—the Canastota mucklands of central
New York—produced world-class onions and vegetables, as well as
some unique oral histories from Italian immigrants and their families
who farmed the land.

MUCK: to the agriculturist it’s a type of farming. Geologists identify it with the bottom of a lakebed and classify it as a type of silty and poorly-drained soil.

Linguistically it’s American slang for thick, sticky mud. But in central New York’s Madison County, muck has a cultural meaning, especially to the Italians who farmed it in Canastota. From 1900 to 1970, Canastota’s 200 muck farms were so successful that the village gained national attention and was named the Onion Capital of the World. To these Italian farmers, muck was about tradition, culture, and family, as well as about labor.

Muck is composed of glacial deposit and high concentrations of deciduous plant matter and phosphorus, making it extremely fertile. Italians originally farmed what was called the Great Swamp, a low, flat, five-mile area of muck south of Oneida Lake in the towns of Lenox and Sullivan. Farmer Janet Tornatore Conner found pieces of shells in the soil of her grandparents’ farm on Ditch Bank Road, marking the remains of a glacial lake that once covered the area. Other farmers found projectile points, evidence that Iroquois people had hunted or fished near the Great Swamp.

Hardworking Italians
The first European settlers in Canastota were English, Irish, and German. By the 1840s, they had dredged canals and ditches to drain the swamp and farm the wet soil, cultivating high-quality celery and potatoes. But agriculture as an industry never progressed because there was no strong manual labor force until the 1890s, when immigrants from Linguaglossa, Sicily settled in the village. These Italians worked on the railroads and moonlighted on the muck farms as sharecroppers. By 1915, thirty-seven Italians owned farms. Their children then bought more muck, doubling the number of farms.

They bought “virgin territory,” about ten to fifteen acres of woods that they cleared by hand. Many used equipment harnessed to horses to pull up roots and weeds. Carlo Tornatore’s farm was cleared faster: the men marked the trees to be removed and sent a woman off “with a stick of dynamite and a match. Then, we let her run!” By 1930, Canastota was one of the largest onion producing regions in the country. Other major businesses in Canastota were celery packing plants and vegetable distributors, all owned by Italians. Muck ultimately produced many more affluent Italians than Canastota natives, an economic “switch” that would change the social dynamics of the village.

By 1939, ninety percent of the Great Swamp had been drained, and the county, state, and federal governments formed a commission to engineer a ditch system to further promote agriculture. Five-feet-wide farm ditches drained fields into commission ditches, which were up to twenty feet wide. The ground water then emptied into mains, like the thirty-foot-wide Douglas Ditch, which in turn routed water into Oneida Lake. The system was not entirely successful, however. Families still remember a major flood in the spring of 1940 when water stood in the fields for a week. As it drained, the fertile soil ran off. Another flood during a hot summer heated the floodwaters and “cooked” growing onions in the ground; the whole area smelled like boiled onions. Farmers couldn’t walk in the saturated, heavy muck to harvest what they could, and cars and farm machinery sank.

A Way of Life
But muck was more than just fertile soil and farmers’ livelihood: it was also a culture, a way of life. While most Canastota natives visited the popular Sylvan Beach on a summer day, Italians went to what they called Black Beach—the mucklands—to work in their onion fields. Children took their shoes off when school ended for the summer and didn’t put them back on until school started in the fall. They loved digging their feet into the cool, moist muck while working on a hot day. Older residents said the period of muck’s heyday, the 1930s and 40s, was the “best time of their lives,” not necessarily linking muck with farming.

Farming peaked by 1945, after World War II increased the demand for truck crops. Farmers planted lettuce, celery, and carrots, but most raised onions, Ebenezer Sets or Yellow Globes. Markets and profits were good, bringing $4.25 per 100 bushels during the war. Planting began in early spring and was a family activity. Children used a hand scuffle to prepare the soil, and everyone planted by crawling and using their thumbs to insert seeds. They weeded between rows on their hands and knees until the August harvest, when the onions were ripe. An important tool on a muck farm was the jackknife, used for topping. This involved cutting a two-foot green sprout off the top of the onion bulb in preparation for crating and packing. Onions were pulled from the ground, topped, put in slatted crates, stacked to dry, and graded for size and quality before they were sold.

Janet Tornatore Conner remembers what it was like working in the muck. “You’d get there usually as the sun was coming up, and it would be cold and damp and wet, and then it would get really hot and dry, and tedious and monotonous, no altering of the labor.” Farmers complained that humidity raised the smell of the onions, which was so intense it made their eyes burn. Rose Tianello recalls, “Everything was done as a family. We worked before school, after school, during vacations. On rainy days we had to work!” Because the farms were so important, women made special clothes so everyone could work during inclement weather: “We wore inner tubes on our legs. My mother sewed them on our blue jeans.”

Women worked while they were pregnant, then balanced childcare and household duties with farming. They hired babysitters, worked the fields, and took breaks to nurse infants. Janet Tornatore Conner was literally raised in the muck. “When we were little, they would put us in an onion crate. Mother would stay very close and work fast, or have us go with her, and then we learned to work the same way. She cooked lunch. There was a lot of foraging; women did most of that.” Teenagers Carol Weimer and Robert Stokes, who were not Italian, worked for pay on local farms. With their lunch, jackknives, and friends in tow, they would pile on the back of a truck and head for the muck. They worked all day, enjoyed the camaraderie, had topping contests, and bought school clothes with their earnings.

Industrious Living
A typical muck farm consisted of what Italian families called a shanty (with no electricity or heat), an outhouse, and a barn or onion crib in addition to the muck fields. Most families also owned a house in the village for winter residence. Muck was reserved for income crops, while hardland (loam) was used for living space, gardens, and crop storage. But during the growing season, since farmers worked, on average, twelve hours a day and wanted to save time traveling from the village to their farms, families lived right on the mucklands in their shanties—an industrious living situation that used the land to optimal capacity. Wells or springs served as a water source. Rainwater was used for laundry and cleaning, and wood or coal was used for cooking and heating (for an average household of eight people). The women also managed the hardland gardens, butchered fowl for meals, and canned pheasants, other game, and farm produce.

Rose Tianello’s farm was typical. Their shanty had “[t]wo bedrooms, a kitchen-living room. An outhouse. It had two seats. We had a barn for crates, and a well. We didn’t have refrigerators! It was a great big crock! My father dug out the ground and made a sturdy top for it to keep the animals out. My mother had a big strawberry patch and peas patch. My godfather brought us a goat.” The farm was the Tianellos’ year-round residence for ten years. “Pearl Bush, our teacher, told my father, ‘Why don’t you buy a house in the village, the girls could be involved in more things?’ [And he said] ‘No. No. No. I want them all to be brought up virgins!’”

The elder Tianello’s concern for his daughters hints at the social division in Canastota. Before 1930, village natives and Italians rarely socialized. Some Italians believed this was because they were farmers, but others felt it was because of their ethnicity. Italians described themselves as being “down” on the muck, and they called contemporary hard land farmers “uplanders.” Rose Tianello remembers the segregation. “They lived on the Southside. We [Italians] lived on the Northside. Years ago we were called Black people, Italians were!” Italians were scrutinized for dating “white” girls, suggesting racial prejudice and social tension. Southsider Carol Weimer remembers, “That is the way it was. It was sad.” What brought the two groups together was La Feasta, the Roman Catholic Feast of the Assumption of the Blessed Mother on August 15. Young people from both cultures attended this Italian street festival. During World War II, tensions lessened because all of Canastota’s men enlisted in the army as “Americans,” and because many Northsiders and Southsiders married.

End of an Era
The 1940s were the hardest years for farming. Storms ruined crops and floods eroded the soil, which made muck farming a financial risk. By the 1950s, Italians preferred factory jobs because they received benefits and a pension. Janet Tornatore Conner recalls that muck farming died out because of both the weather and the market: “It used to be the family, but not every family had siblings that wanted to stay in it. Every family wanted to educate their children.” Some blamed the state: water drained from the newly built New York State Thruway into the farms, and flooding and road salt ruined the muck. Natives felt that the Italian farmers had overworked the soil. But farms failed for many reasons.

The muck lifestyle defined a culture and cultivated family traditions, but it was also a million-dollar American business perfected and made profitable by Italian immigrants. Muck agriculture ultimately boosted the state’s economy into national significance, while at the same time changing the social structure and a community’s identity. Although the muck farmsteads are now in ruins, and most of Black Beach has reverted to a wilderness, the memories of those who “grew up on muck” give a fascinating insight into the social, cultural, and economic impact of this unique twentieth-century farming technique.