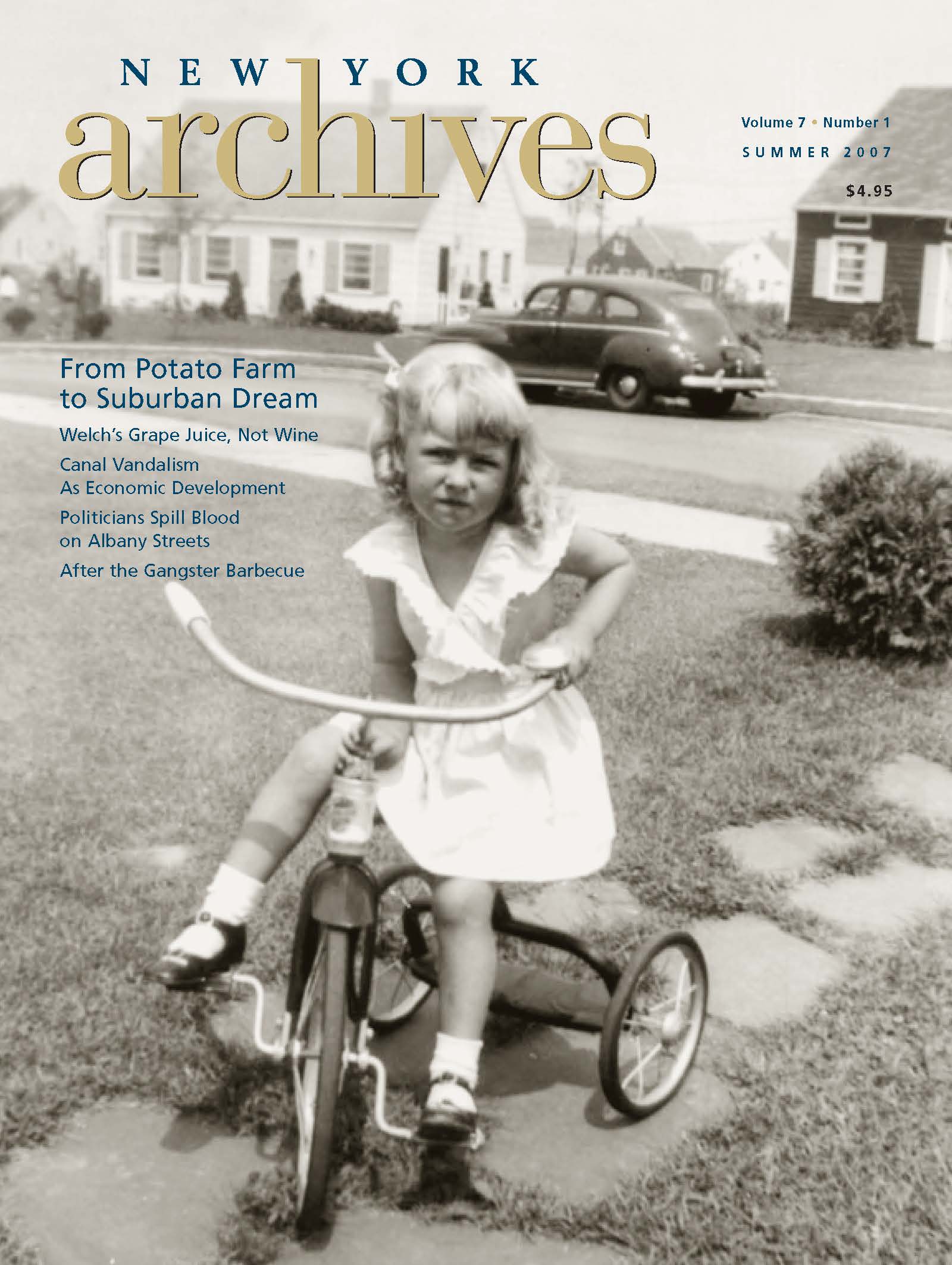 Salesman of the American Dream
Joshua Ruff
Levittown: the name still means "suburbia" to millions of Americans. But Bill Levitt, its namesake, is remembered as a developer whose reach extended far beyond Long Island's post-World War II building boom.

The Forestport Breaks
Michael Doyle
Who sabotaged the Erie Canal? Genealogical sleuthing and historical research reveal a small town on the edge of the Adirondacks as the locus of a homegrown crime that reached throughout the state.

"Fellow Citizens, Read a Horrid Tale..."
Tricia A. Barbagallo
In the nineteenth century, public officials followed a code of honor to resolve disagreements both political and personal. But that code was broken one spring day in Albany.

Watchdogs of the State
Philip A. Bean
A 1957 meeting of criminal minds in Apalachin, a rural town near Binghamton, led to political inquests and a power struggle at the highest levels of state government.

Darkness fell, and the ruffians gathered like ghosts. Forestport was distracted with its customary frolics on the evening of May 23, 1898. Surrounded by six sawmills, the Erie Canal-side town in upstate New York’s upper Oneida County scared the faint of heart. Its bars and pleasuring establishments pulsed with the rowdy river drivers down from the Big Moose River, the wizened and de-fingered sawyers, the canawlers still clinging to their dying trade.

“The citizens are a hardy class of men, honest in the main,” the Brooklyn Eagle would observe in January 1900,“but having among them… the reckless daredevil class which makes its living away from humanity and modern civilization in general.”

Prosecutors would make the Forestport case more bluntly. “They’ve got more saloons than houses,” one law enforcement official would state in May 1900, “and that is the way the town is ruled.” True enough: the town of 1,500 souls boasted half a dozen saloons, whose owners pulled the strings. There was Walt Bynon’s place, and big Dick Manahan’s Getman House, and Jimmy Rudolph’s dangerous pool hall, and the lumberjack’s hotel known as Doyle’s. Forestport was a town on the edge, where civilization merged with the North Country wilderness.

Remsen was a rather more placid town, twenty minutes away by the New York Central Railroad line. When the detectives from the Pinkerton National Detective Agency started coming, they transited Remsen. But that would be later, after the Forestport canal levees had collapsed once too often and suspicions could no longer be suppressed. “There is no law,” people whispered, “north of Remsen.”

How the Deed Was Done
Erie Canal authorities may have grown accustomed to breaks; by the late nineteenth century, the whole system was as dilapidated as an old man with brittle bones. But when the Forestport levees broke in 1897, and again in 1898, and once more in 1899, the coincidence would provoke Governor Roosevelt’s team of investigators. What they subsequently found, one prosecutor would thunder in1900, amounted to “one of the most gigantic conspiracies that was ever concocted in New York State.”

On the night of May 23, 1898, four men gathered unnoticed amid Forestport’s customary mayhem. They snuck away from River Street and crossed the bridge spanning the Black River, the sounds of saloon revelry subsiding as they walked up a hill toward the Forestport Feeder canal. The Feeder connected Forestport to Boonville and the Black River Canal eleven miles away, but the men were not going that far. Instead, they struck off down the towpath for several hundred yards, lugging picks and shovels and a bottle. Two of them separated to stand watch. The other two, pool hall owner James Rudolph and a local hard case named John Root, took a warming pull of whiskey and readied their tools. “And Root and I,” Rudolph would later testify, “went to digging.”

Pratt’s testimony was recorded in a trial transcript found at the Oneida County Courthouse, as well as in microfilmed editions of the Boonville Herald, Rome Daily Sentinel, and Utica Observer. In fact, all of the Oneida County newspapers were enraptured by the story of the frequent Forestport breaks that unraveled over the course of several years. By the time a series of criminal trials began in Rome in April 1900, reporters were swarming over the rough-and-tumble town and its ill-fated canal levees.

Walking Through History
It’s 108 years later, September 30, 2006. Saloon girls sashay before Scooter’s bar, a rugged but warm-hearted place that a newly painted sign identifies as Forestport’s old Hotel Doyle. Nickel beers have been poured since ten in the morning, enlivening spirits for the first ever Old Forestport Days. A parade forms: a mounted posse, buggies, and impeccably restored antique cars depart River Street at a ceremonious pace. The parade crosses the Black River bridge and moves uphill toward the Forestport Feeder. At the garlanded head of the canal towpath, Scooter’s co-owner, Jeannie Wolcott, dedicates the newest section of what’s called the North Country Scenic Trail, a 4,600-mile braid of trails connecting North Dakota to Lake Champlain.

Celebrants stroll down the towpath to the place where, 108 years earlier, John Root, James Rudolph, and their cronies had dug all night. Some clues of physical rupture and reclamation endure, and a sepia-toned image forms in the mind’s eye: the diggers slivering away the towpath until the canal water starts sluicing through, carrying chunks of levee downhill toward the Black River. One imagines the wound confronting canal men on the fog-bound morning of May 24, 1898.

I came upon the crime scene by accident.

While researching my family history, I learned that my great-grandfather and namesake, a certain Michael Doyle of Forestport, New York, had owned a saloon and lumberjack’s hotel. How colorful, I thought. Growing up in California and working as a newspaper correspondent in Washington, D.C., I knew (and cared) nothing about Forestport—until I began digging too.

Census records at the National Archives, and birth and death records in Oneida County, got me started. Turn of- the-century county histories fleshed out names and faces. At the State Library in Albany, annual reports from the New York State Engineer and Surveyor recorded the Erie Canal’s rise and fall. Canal depredations proved to be well documented; the Archives’ shelves were thick with reports from canal investigating commissions established in 1846, 1876, and 1898. “If the state’s waterways are used as means of favoritism, bad appointments, corrupt contracts or extravagance and mismanagement to promote partisan ends at the expense of public service…there ought to be exposure,” the New York Times reasoned in September 1890.

The Forestport breaks had been sketchily described in works like Noble E. Whitford’s 1906 opus History of the Canal System of the State of New York, but the breaks were never explored in depth. So that’s what I set out to do when I began the research that led to my book, The Forestport Breaks: A Nineteenth-Century Conspiracy Along the Black River Canal, published by Syracuse University Press in 2004.

For Money—and Memory
I learned that for decades, well-connected men had plundered the Erie Canal. Businessmen had soaked it with costly contracts, politicians had padded it with patronage jobs, and it had provided dark inspiration for the saloonkeepers and hotel owners of Forestport, who had banded together to hire Jimmy Rudolph’s gang. Whenever the canal levees broke, the state would hire hundreds of workers and spend tens of thousands of dollars on repairs, making Forestport flush—for awhile.

“The Forestport men,” the Brooklyn Eagle declared in January 1900, “did not have the position that enabled them to make the raid on the treasury in a polite and genteel manner, and so they went at it brutally.”

And Michael Doyle? He had been in the middle of it all. Pinkerton detectives peeled away the Forestport layers until they understood how—and why—the breaks occurred.

Good old great-granddad! He inspired the 1898 plotting, and similar commercial considerations brought about the breaks in 1897 and 1899. Ultimately, thirteen Forestport men were arrested––the first time anyone was charged with conspiring to destroy Erie Canal property. Several went to Auburn State Prison, but Michael Doyle escaped prosecution by dying before the Pinkertons arrived.

But today his place still stands, as Scooter’s bar; the Forestport Feeder still flows; and the towpath still beckons, all of them found through digging up the archives this time, a refurbished trail of ghosts and memory.