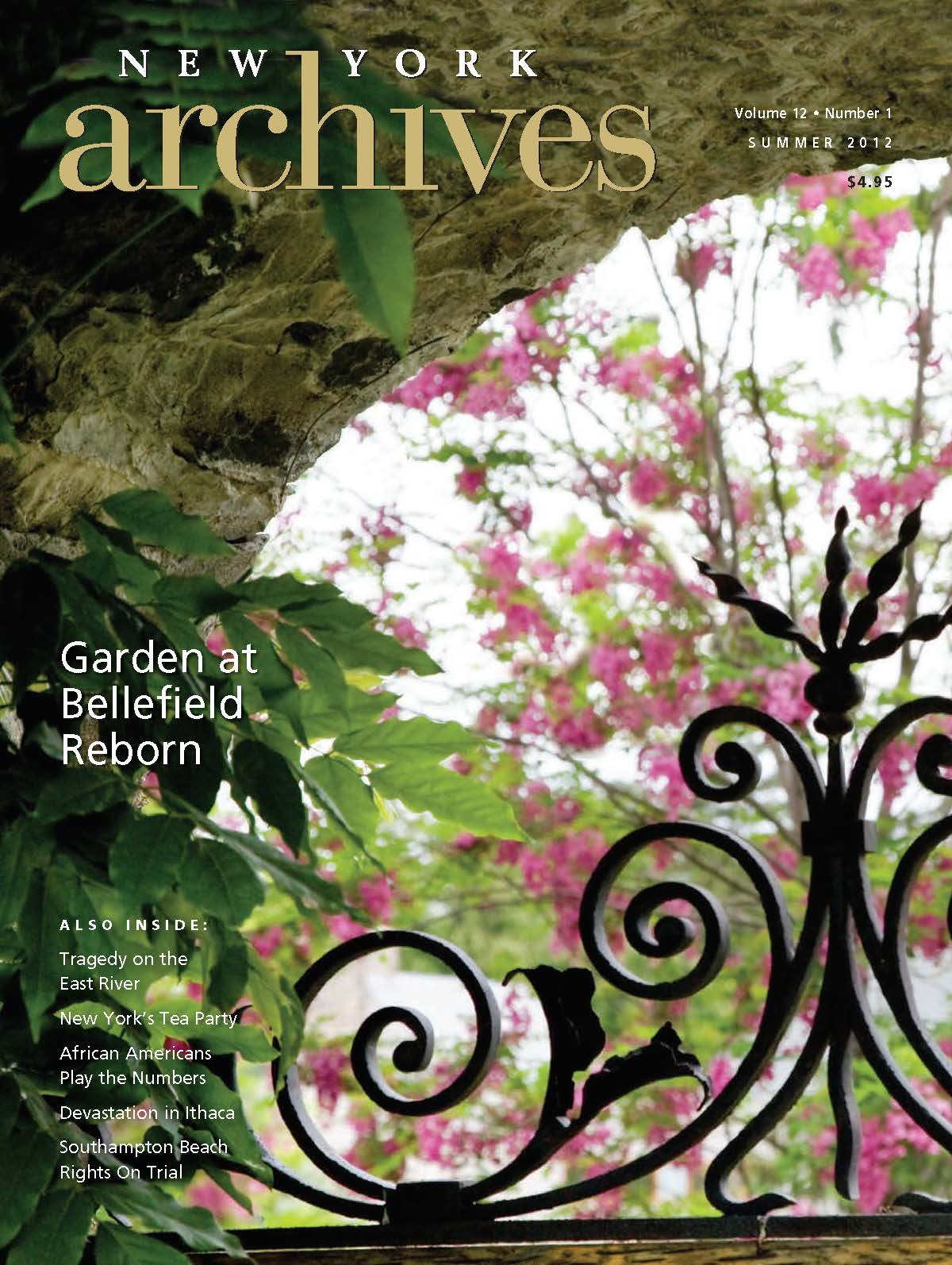 Disaster on the General Slocum
Gail Mahoney
In 1904, it took no more than twenty minutes for a church-sponsored pleasure cruise on the East River to turn into tragedy.

Celebrating A Garden Lost and Found
Alice McGowan
A Hyde Park garden designed in 1912 by the eminent landscape architect Beatrix Farrand has been re-created and restored.

No Day at the Beach
David Goddard
Southampton’s two communities—“ locals” and summer people—went to court in 1892 to answer the question: whose beach was it?

Typhoid in Ithaca
David DeKok
The circumstances that led to Ithaca's typhoid epidemic in 1903 still give pause more than a century later.

The lottery, an old English practice, came to the American colonies with the early settlers, and by the beginning of the nineteenth century lotteries had become a very big business. By 1827, there were 190 lottery offices in New York City. A writer for the New York Evening Post wryly noted that a stranger might suppose “one half of the citizens get their living by affording the opportunity of gambling to the rest.”

A Game for Dreamers
Occasionally free African Americans and even slaves bought lottery tickets, but blacks were more closely linked with a related form of gambling known as “insuring the lottery” or “policy,” which had developed alongside lotteries. For a small sum of money, much less than the cost of a lottery ticket, individuals could “insure” a number with a broker or agent—in other words, take the chance that that particular number would be drawn in a lottery on a given day. If they “hit” and the number was drawn, their gamble was paid off at high odds. Policy, a game that tantalized with the dream of transforming very small sums of money into large ones, was designed to soak up not just the spare pennies of the poor, but also, as its critics repeatedly pointed out, the hard-earned wages that should have fed, clothed, and sheltered their families. Those who gambled on policy tended to come from the poorest stratum of society, which meant that, in the cities of the Northeast, there was a close association between African Americans and “insuring the lottery.”

Early lotteries were complicated affairs—often it took months for all the prizes to be drawn - and in the 1820s, in an attempt to make the system more efficient and to curb policy insurance, the “ternary combination principle” was introduced. From a pool consisting of the numbers one through seventy-eight, twelve were drawn. The lottery ticket bearing the first three numbers, drawn in order of appearance, won first prize; the fourth, fifth, and sixth numbers won the second prize; and so on. Tickets with two or even one drawn number won smaller prizes. The new method did save time—winning lottery numbers were now determined in a matter of minutes—but it made no impact on the rapidly expanding business of policy insurance.

By the late 1830s and 1840s, although lotteries themselves were illegal in New York City (the state legisla-ture had banned them as of January 1, 1834), every weekday thousands of gamblers were insuring numbers on the Delaware Lottery, whose results came in to Manhattan at 1 p.m., or the Jersey Lottery, whose results arrived at 4 p.m. Insuring the lottery was also illegal, but spread throughout the city were hundreds of policy shops and agents eager to take bets.

Targeting the Poor
In August 1839, Joseph Ten Eycke, a black man, visited a policy shop on Bayard Street run by a black woman named Jeanette Parker. She was an agent for Josiah Paine, a white broker, who insured numbers in the Wilmington lottery. Ten Eycke picked 7, 54, and 24 as a “gig” (three numbers); had “saddles” (two numbers) on 7 and 54 and on 24 and 7, and also bet 24 as a “day number.” All in all, Ten Eycke gambled $20, and should have received the substantial return of $625 when several of his bets “hit,” but Paine refused to pay up, causing the black man to have him charged. What is fascinating about this and other accounts is how many features of numbers in Harlem in the 1920s and 1930s—not just the betting, but also the particular language used, as well as the fact that the banker had welched when a large sum of money was involved—were already in place a century earlier. Ten Eycke claimed that he had “spent hundreds of dollars in purchasing tickets and insurances on these lotteries,” and he was hardly the only African American plunging heavily on policy. And it is not surprising that an illegal business, unregulated by law, which was largely patronized by the most powerless members of society and which turned over tens of thousands of dollars every week, was rotten to its core.

The visibility of blacks in policy was out of all proportion to their representation in New York City’s population, let alone their position as the poorest inhabitants of the metropolis. According to the editor of The Ram’s Horn, a black newspaper, in the mid- 1840s––a time when African Americans constituted only 2.8% of the city’s inhabitants–– $2,500 out of the estimated $10,000 gambled every day on policy came from blacks. White newspaper editors railed against the havoc wreaked by what they viewed as a contagious and addictive vice. In May 1846, the National Police Gazette claimed that “there is no such thing as trusting a negress as a domestic servant at all any more,” since every sum of money that went through her hands was tithed a few pennies “for the purpose of feeding her passion for policy gambling.” Time after time in the 1840s and 1850s, white commentators indicated they believed that almost every city black gambled regularly on policy. In 1847, the editor of the Police Gazette went so far as to propose that “any Negro going along the street” should “be subpoenaed at random,” as almost certainly a quick rifling through her or his pockets would turn up a fistful of policy slips.

Northern Lights
The whites running the policy business in New York in the 1840s and 1850s certainly appreciated that thousands of dollars were being wagered every day. A few black men or women operated policy shops, but they were relatively rare. More commonly, whites would employ blacks as agents in an effort to maximize business from African Americans. The intense rivalry between competing policy shops meant that individual agents sold insurance on the various lotteries up until the last moment before the results arrived in Manhattan. Consequently, a considerable amount of human ingenuity was invested in devising ways of transmitting the results of the drawings in Delaware, Maryland, and New Jersey to New York ahead of the official notification. If this could be achieved, then obviously bets could be placed on guaranteed winners. Some- times carrier pigeons were used; indeed, “policy pigeoning” became a generic term for this type of fraud, no matter how it was committed. On occasion, con artists also tampered with the clocks in policy shops, allowing bets to be placed after the results had arrived in the city.

This, of course, was petty stuff. But it paled to insignificance compared with what went on in New York in 1842 and 1843; the level of complexity and chicanery of the fraud brings to mind George Roy Hill’s film The Sting (1973). Stations were set up every thirty miles atop whatever prominent features of the landscape were available between Wilmington and New York for the Delaware Lottery, and between Baltimore and New York for the Maryland Lottery. A set of what were called Bengola lights was then used, with a red light standing for tens and a white one for units, and the numbers were flashed from hilltop to hilltop. To prevent this valuable information from being seen by all, a code was used, so that while “one red light and six white ones might appear to indicate sixteen, it may mean forty-five.” Astonishingly, results of the Delaware Lottery reached New York in twenty-five minutes, and the Jersey numbers were known in the city one minute after they had been drawn.

The result of all this was chaos on the city streets. As the Subterranean reported, many policy agents were involved in this scam “out of self protection and those who are in the secret retaliate upon the players, by spreading a report that eight or any other, is a pigeon number, to induce players to buy, when sixteen as they already know, is the real number.” This, as the newspaper commented, was “a game of rogue fleece rogue and the poorest and most stupid go to the wall…Crowds of poor, ignorant negroes who imagine they have got a pigeon number manoeuvre to appear unconcerned while buying it,” as knowing agents pocketed their money. “It would appear incredible to the uninitiated,” the Subterranean pointed out, if they could see “the extent to which this system of juggling is carried.” There was “hardly a steeple in the city but what is used as a look-out for lights and scarcely a negro goes along the streets who is not dreaming what will be first in Jersey tomorrow.”

Legacy of Rogues
Inevitably, in a system that was rigged to this extent, it was those at the bottom of the heap who were the most exploited. Not only were blacks duped with fake pigeon numbers, but even if they beat the odds and picked the right number by themselves, “pigeoning” was used as yet another excuse for not paying them their winnings. In July 1842, the Flash excoriated Hiram Marsh of 118 Chatham Street, detailing one case where a black “had hit Marsh for sixty dollars” but was “done” out of both his winnings and his original stake. When the black man had fronted up for payment, “he was accosted by the bully Marsh with ‘Well, you d---d black rascal, you pigeoned me last night, eh? Now walk out of my office, and if I ever catch you here again, I will blow your black head from off your shoulders.’”

In spite of the fact that the game was fixed by the whites running it, “insuring the lottery” continued to be popular in New York with blacks until it died out in the early twentieth century. About 1920, Casper Holstein, recognizing the vacuum left in African American life by the demise of policy, created a new version called the Clearing House Numbers. Holstein had learned from history, and for the first dozen or so years he and his compatriots kept the white gangsters at bay: numbers in Harlem took off like wildfire, rapidly became the most important black-run business in America, and the Kings and Queens, as those who operated the business were known, made millions of dollars.