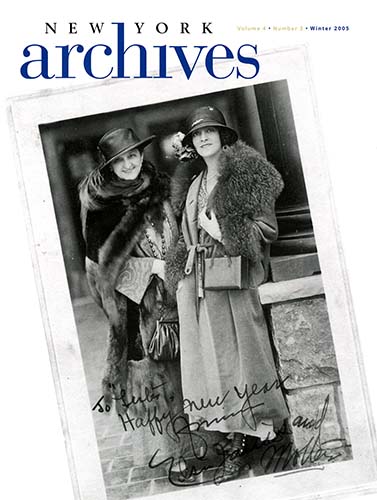 The Sweetheart of the A.E.F.
William F. Howard
Elsie Janis’s extraordinary career as an entertainer reached its peak at the Western Front during World War I.

Small Town vs. Big City
Warren F. Broderick
Author Granville Hicks wrote from experience: his seminal book
on small towns was set in his own hometown in upstate New York.

The Early Days of Wall Street
Howard M. Wachtel
Albany was the locus of natural history research and discovery in the mid-1800s, as well as the site of a sensational trial over scientific authority

The Sweetheart of the A.E.F.

Elsie Janis’s extraordinary career as an entertainer reached its peak at the Western Front during World War I.

Nearly thirty years before Bob Hope traveled to the front lines of World War II, a young vaudeville star abandoned the stages of New York and London and made her way to the battlefields of France. Elsie Janis performed there as a private citizen without pay, exposing herself to the dangers of war, because she believed it was her mission to bring cheer to the British and American soldiers of World War I. While many women left their homes and families to provide aid and comfort to the soldiers as nurses and civilian service workers in France during World War I, the soldiers loved Elsie Janis, the "Sweetheart of the A.E.F.," best of all.   Her lilting voice and acrobatic dance routines brought culture and a bit of home to the battlefield, and she, in turn, established a lifelong attachment to the men who fought the war, even after her career as an entertainer had faded.

"The Rage of London"
Janis was born in Columbus, Ohio on March 16, 1889. Coached by her mother, Janis performed in local church benefits at the age of two and was in stock theater by age seven, already intensely driven toward fame. She changed her surname from Bierbower at the suggestion of a New York photographer, who thought that Janis (a play on Jane, her middle name) would sound better to the New York theater crowd.   At age ten she was invited to entertain President William McKinley at the White House.   By fourteen, she was performing on the Broadway stage, and by seventeen she was the star of the play The Vanderbilt Cup , which enjoyed a two-year run. The New York Times noted her seventeenth birthday, and found humor in reporting that a group of Yale students celebrated it by sitting in the front row of the Broadway Theater and throwing violets onto the stage at the end of the last act.

Janis subsequently appeared in The Hoyden, The Fair Co-Ed, and The Slim Princess, and starred in her own play, A Star for a Night, when she was just twenty-two. She left for London early in 1914 and performed to rave reviews in two editions of The Passing Snow . By the start of World War I, she was "the rage of London" and the most popular American actress on the British stage, a talented vaudeville performer who combined comedy, dance, and impersonations in her act.   Her impressions of the great actress Sarah Bernhardt won recognition from the "Divine Sarah" herself, who cabled the young Janis in London and told her to continue.

To the Front
But at the height of her fame, Janis left the London stage to travel to the military camps surrounding the city to entertain the British troops who were departing for France.   One of those soldiers was her fellow actor, Basil Hallam, who had won her heart both on- and offstage.   Janis described their parting in her memoir So Far, So Good!, published in 1932:   "[I] left him standing on the platform of Euston Station, chin up, blue eyes clear and fearless.   In my hand I held a photograph he had posed for at the last moment in uniform and on it he wrote, 'If we still love those we lose, can we ever quite lose those we love?'"

Tragically, like so many of his generation, Basil Hallam died in France. Janis never quite recovered from his death, but renewed her commitment to travel to the front and provide entertainment to the troops.   She wrote, "I was never really happy again until April 6, 1917, when America slipped in to take her share of the burden and the glory of the world.   From that time on I had but one idea, and that was to get to France and do for our boys what I had done for the others--for I thought, if the Tommies liked me in their own land and were surrounded by their families, what would our boys feel, three thousand miles away from home?"

Janis and her mother, who accompanied her to France, spent six months at the Western Front, often within artillery range of the Germans.   She was the first female entertainer ever permitted on a military base, and she began an exhausting schedule of shows, traveling from camp to camp, hospital to headquarters.   She sometimes performed up to nine forty-five minute shows a day, always beginning with her cheery question, "Are we downhearted?", to which thousands of soldiers would shout "No!". She became a fixture at the front, and was even allowed to pull the lanyard on one of the big guns—dubbed "Elsie" in her honor—that was pointed at the German lines. General John J. Pershing, commander of the American Expeditionary Forces, was so impressed with her impact on troop morale that he assigned her a car and driver. An American officer wrote that "[t]he British give their men rum before a battle, the French cognac, and we give ours Janis."

Visiting an Allied hospital in Nevilly, France, Janis described her efforts in simple terms:  "I went into the wards and tried to make them forget that they had wounds.   I could write pages of the bravery of our men, not under fire because that goes without saying, but under real and terrible pain.  Whether they had lost one leg or two, whether they would perhaps never see again, the smile was always there for me and my little jokes. I sang sometimes in as many as fifteen wards in a day.   I usually had a good cry when I got home, but my reward was in the fact that the boys wanted me."

The War Ends
During her time in France, Janis was exposed to a new form of music that she heard played by the African-American soldiers whom she encountered at the front.   Although she often laced her performances with racial caricatures and skits that are embarrassing today, Janis was impressed with the music of the Black bandsmen and sought to bring the jagged, improvisational sound of jazz back to London and New York.  She later incorporated it into a successful London revue titled Hullo, America!, starring herself and a young actor named Maurice Chevalier.

Although she had given up her extraordinary stage career to go to the Western Front, Janis never regretted her decision. But when the war ended in November, 1918, she was left with mixed feelings. She had never felt as alive and purposeful as she did when she visited the soldiers in France, yet reflecting on the end of the war, she lamented, "From that time on, things were not quite the same to me; something seemed to have snapped somewhere in the region up where my heart would have been if I had not left it in France. I still went to the hospitals and camps, still sang of taking my jazz band to the Fatherland, but not with the same vim, because I knew that the biggest thing in my life had gone out of it, never again would I sing to and cheer two or three thousand of our wonderful boys, and send them from me singing into the unknown. I was glad that their battles were over, but I was selfish enough to be sorry that my work which gave me such indescribable and infinite joy was ended."

Janis returned to New York in 1919 on the Danish ship Rotterdam. She was met at the dock by a large crowd and by a tugboat bearing a huge sign that read "Welcome Elsie Janis." She and her mother subsequently returned to the Philipsburg Manor house near Tarrytown on the Hudson River they had called home since 1915. She loved the house that had been built as a milling and trading complex by Frederick Philipse in 1683, and enjoyed entertaining friends from the city who came north to visit. The composer Irving Berlin was a frequent guest, as were Douglas Fairbanks and Mary Pickford.

Her Bright Star deFas
During the 1920s, Janis appeared in several silent films, among them The Imp, and was under contract to David Selznick for $5,000 per week. She and her friends made the daily trip to the studio by sailing from the Philipse Manor Yacht Club to New York--lavish voyages made more so by famous guests and extravagant parties aboard ship. But like many vaudeville stars, Janis failed to make the transition from the stage to "talkies." Although she tried to reinvigorate her stage career by playing the lead in the Gershwins' Oh, Kay! on the West Coast, she found that the memories of the Great War were fading at the same pace as her career.

Janis's free-spending habits and a bank failure during the Depression took much of her fortune in the 1930s. Her finances were further depleted by a serious auto accident in 1935; she was forced to auction off her beloved Philipsburg Manor house the following year, along with most of her memorabilia and possessions. She moved to Hollywood, and as war clouds gathered once again she attempted a return to the stage in 1939. She appeared in four Sunday night patriotic concerts, although these generated little public interest, and then in Frank Fay's Music Hall , a sad attempt to revive vaudeville, but the show closed after suffering negative reviews. She made one last film, Women in War , in 1940.

"Only One Real Peak"
Elsie Janis spent her final years in retirement in Hollywood, where she died on February 26, 1956, nine days shy of her sixty-seventh birthday, with her good friend Mary Pickford at her side. The framed photograph of Basil Hallam, who had died in France so long ago, was still prominently displayed on the nightstand beside her bed. While her ambition had always pushed her forward toward the next great challenge, in her memoir she acknowledged the historical and personal importance of her career as the "Sweetheart of the A.E.F." forty years before: "There is no doubt that with the end of the war came the death of something inside me. I've been pleased with work that I've done and grateful for the success I've had, but the war was my high spot and I think there is only one real peak in each life."

[sidebar]
Elsie Janis's diaries consist of five volumes in the Billy Rose Theatre Collection of the New York Public Library, but her entries (one page for each day) are sketchy and do not provide researchers with much historical information. Janis's books about her life, The Big Show: My Six Months With the American Expeditionary Forces (1919) and So Far, So Good! (1932), as well as newspapers from the period and other publications, are much richer sources of material on her life and times.