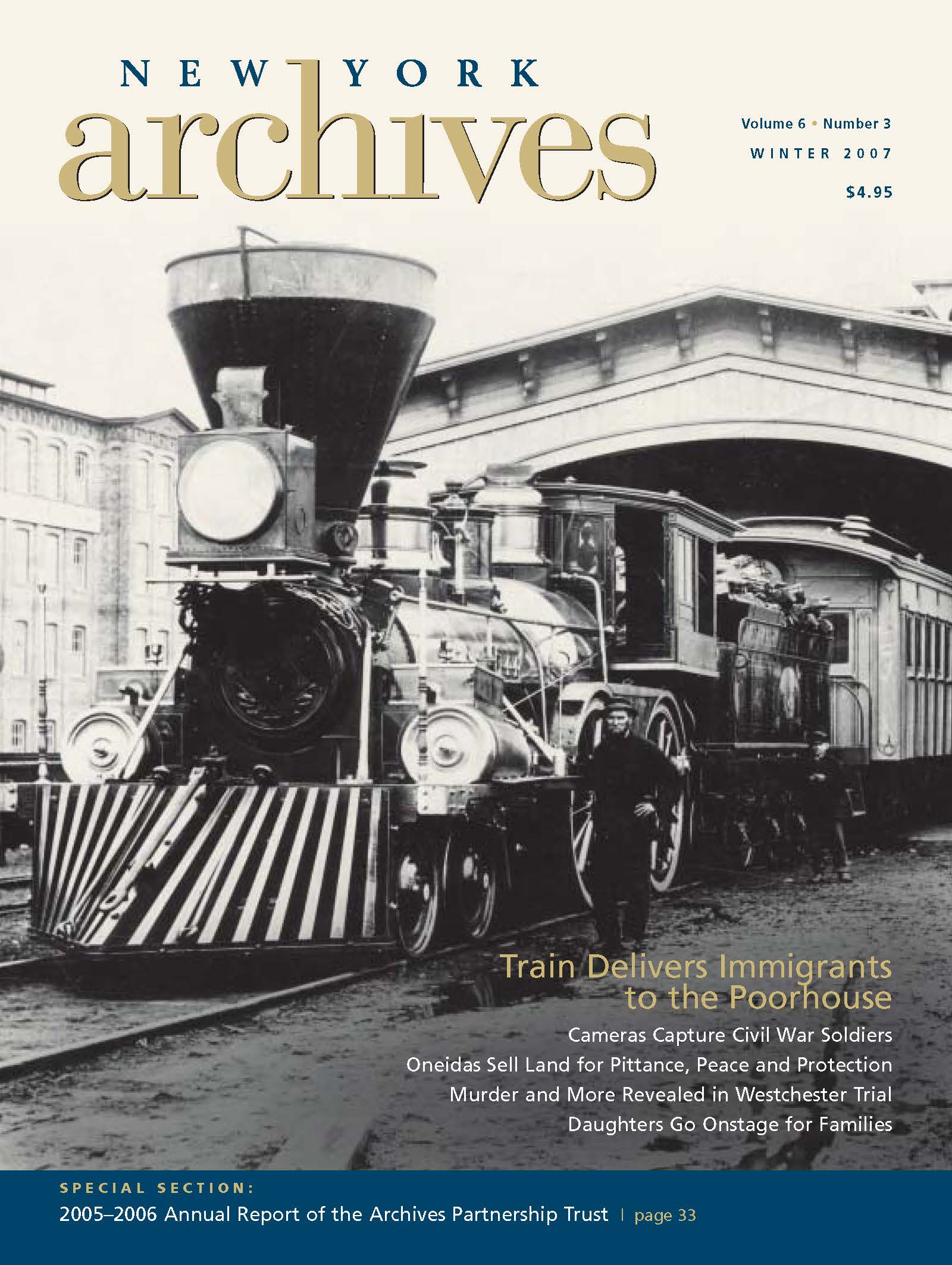 Good Peter and the Governor
Alan Taylor
After the Revolution, two powerful men--one an Iroquois warrior, on the governor of the new State of New York--debated the future:not only of the Iroquois land of the Mohawk Valley, but also of their people

Walking Ladies
Nan Mullenneaux
In the mid-1890s, American theater was working hard to upgrade its seedy image, particularly for women and families. Then two girls from Troy, New York walked onstage and changed everything.

The Emigrant Train
Michelle Henry and Pamela A. Brown
The nineteenth-century transportation revolution made New York's Southern Tier a crucial stop for commerce--and for an influx of unexpected immigrants

Images of War
William F. Howard
Advances in photography just before the Civil War made everyone a subject and "photographic artists: the first visual chroniclers of war. At the center of New York's government, Albany's photographers were no exception.

Murder in The Hills
Edythe Ann Quinn
A now-vanished black community in Westchester was riven by a shocking 1895 murder committed by on of its citizens. Records of the trial reveal daily life in The Hills, as well as evidence of prevailing racist attitudes of the time.

By Michelle Henry and Pamela A. Brown

The New York and Erie Railroad was first proposed in 1829, to compete with the Erie Canal (which had opened in 1825) by giving western rail shippers a direct route to the market and port of New York. The route began on the banks of the Hudson River at Piermont, crossed New York’s Southern Tier counties, and terminated at Dunkirk, a natural harbor on Lake Erie in Chautauqua County. The 483-mile-long railroad took nineteen years and $24 million to construct. It was the longest in the world at the time, and was considered a marvel of engineering.

On May 15, 1851, the first train arrived in Dunkirk. Aboard were Millard Fillmore, President of the United States, his entire cabinet, and Secretary of State Daniel Webster—who, accompanied by a bottle of whiskey, had strapped a rocking chair onto a flatbed car for the seventeen hour journey so he could enjoy the countryside.

Residents of western New York and the Great Lakes region anticipated great economic prosperity with the opening of the New York and Erie Railroad, and land speculators snatched up property around Dunkirk harbor. However, instead of bringing prosperity, the railroad began delivering immigrants, many of whom had no means of support or conveyance to a further destination. Between 1838 and 1867, records show that Chautauqua County’s poor farm and Superintendent of the Poor provided relief for over 35,000 immigrants; by the fall of 1851, an “Emigrant Train” had been added to the New York and Erie’s daily schedule, and a steady stream of immigrant paupers began arriving in Dunkirk.

In Support of Immigrants
Prior to 1847, there were no federal or state regulations administering the flow of immigrants into the United States. But that year, the New York State Legislature passed several measures to address the growing number of immigrants arriving at New York City, the busiest port in the country. A “commutation fee” of $1.50 a head, later raised to $2.50, was to be collected on all persons landing at the port of New York; this fee would be applied for the relief of immigrants unable to support themselves within their first five years of residence because of sickness, unemployment, or other causes. That same law provided for the establishment of a six-member Board of Commissioners (of Emigration) to administer aid to, and ease abuses against, immigrants. The commissioners were directed to reimburse Overseers (or Superintendents) of the Poor in each of New York’s counties for providing relief to immigrants. Overseers were given discretionary authority to expend $10 for one poor person or family requiring only temporary relief. The law stipulated that immigrants seeking relief would be transported to county poor farms within two hours of their arrival in the U.S. and immediately given labor to perform. The value of the labor would be deducted from the net cost of relief.

The annual reports of Chautauqua County’s Superintendent of the Poor to the county’s Board of Supervisors construction and after the completion of the NY & E Railroad, the county was flooded with foreign paupers. The number of poor relieved in 1850 was 431 and by 1855 the number had steadily increased to 2,952—an increase of nearly seven fold within five years. This increase was nearly all by emigration and for temporary relief.”

1852 was also the first year that Chautauqua County presented claims for reimbursement to the Commissioners of Emigration. Each claim had to be sworn by the immigrant, and included his or her name, age, occupation, last place of residence, foreign port of embarkation, name of vessel and commander, date of arrival in New York, date of relief, and the amount of relief. The Superintendent of the Poor also had to swear to the necessity for the relief and the cause of the recipient’s pauperism. Only two other counties in New York State, Kings and Albany, were submitting claims as large as Chautauqua’s. But many of Chautauqua’s claims were denied, on grounds of missing information or not reporting promptly.

“A Flagrant Wrong”
The county argued that since the law of 1847 gave Overseers of the Poor discretionary authority to expend $10 for those requiring temporary relief, such people could not legally be sent to the poor farm. Many of the immigrants arriving in Dunkirk by train had boat tickets for a more western destination but often had to wait two to five days for their boat to leave, due to scheduling or bad weather. If they had no means to obtain food or lodging, these people were forced either to beg or to appeal to the Superintendent of the Poor for relief.

The county’s Board of Supervisors wrote that it would be “a flagrant wrong” to take these paupers to the poor farm for two or three days and then hire teams to convey them back to Dunkirk. Chautauqua County’s poor farm was located in Dewittville, twenty-five miles uphill from Dunkirk, and such transportation was neither cost effective nor practical, since during the winter months the roads were frequently impassable for several days. Rather, the county requested that the commissioners’ rules be modified or rescinded––but the request was repeatedly denied.

In the 1854 Board of Supervisors’ annual report is the following account: “[O]n the 25th of November last, the ship Michael Angelo arrived in New York, and within twelve days thereafter, 67 of her passengers were, at the commencement of winter, without money, means or friends, comthrown upon our county for relief. Many of them stated to us that they were poor, and had no money or property in Baden [Germany], their former home; that their passage to America was paid, by whom they did not know, and that when arriving in New York, they were furnished with railroad tickets to Dunkirk by a still mysterious arrangement. Representations were made to them that when they arrived here their every want would be supplied; that Dunkirk was the goodly place where all could find employment, friends, and every needful thing. Many of them had to be sent to the Poor Farm for a winter’s support, and some of them remain there still; for others we have obtained employment where they are supporting themselves, and several of the children have been bound out to good places. We report the above facts, as they seem to prove the truth of the statement that the poor houses of Europe were being emptied into our cities and villages.”

Claims Paid—and Denied
Records from the county’s poor farm indicate that many families did indeed arrive in Chautauqua County with an immediate need for relief. The Charles Peters family arrived in New York from Germany on September 6, 1857. Just four days later, the family of eight—Charles, fifty years old and crippled; wife Frederica; and six children aged four to twenty—applied for relief in Chautauqua County. Andreas and John Miswea, ages eleven and eight respectively, arrived at Castle Garden (the first immigrant receiving center in New York) on August 21, 1856 from Poland. On September 24, they were admitted to the Chautauqua County poor farm with the following information: “The family is searching for them through the German Society. The parents are in Milwaukee. The boys’ passage was paid from New York through to Milwaukee but in the hurry of starting they got in separate [train] cars which is why the children were put out at Dunkirk.” The commissioners instructed the county to pay for the boys’ passage to Milwaukee and include it on the next voucher for reimbursement.

But many of the county’s claims submitted to the commissioners continued to be denied because of technicalities. In 1858, Chautauqua County’s Board of Supervisors passed a resolution authorizing the Superintendent of the Poor to compel the Commissioners of Emigration to audit all legal accounts. With this authority, a representative of the county went to New York City and demanded a settlement of six years’ claims. The commissioners agreed to pay the accrued claims they had been repudiating. The agreement was made in writing, but was never fulfilled.

By 1861, these repudiated claims amounted to about $4,000, yet requests for action to the commissioners went unanswered. In 1866, the problem was referred to State Senator Walter L. Sessions from the Village of Panama in Chautauqua County, who introduced a bill compelling the commissioners, under penalties, to pay claims for services. But the commissioners sent an emissary to negotiate with Sessions for a stay of legislative proceedings and to strike a deal: if his legislation were withdrawn, the commissioners would agree to make a special rule in favor of Chautauqua County, pay for one Deputy Superintendent of the Poor to be stationed at Dunkirk specifically for immigrants’ relief, and pay claims for services back to 1865, totaling $447.50.

A Permanent Debt
The deputy was appointed and began working in Dunkirk, but when the bill for his services was presented to the commissioners, they refused to pay. After two years, the deputy’s bill surpassed $2,300, and the $447 owed for previous services was still unpaid. In 1868, the commissioners met, repealed their earlier agreement, and offered the county $1,000 to “call it square.” Once again, the county threatened legal action, and in 1869 two county supervisors went to New York City and threatened to stay there until the claims were settled. Their persistence resulted in payment of $2,150 against more than $5,600 in claims. The unpaid balance was assumed by Chautauqua County taxpayers.

By 1876, the Superintendent of the Poor no longer kept separate accounts for immigrant paupers, since the additional paperwork was not cost effective as long as claims continued to be denied. Chautauqua County was due over $5,000 from the Commissioners of Emigration, but nothing had been received since 1873. Later in 1876, the United States Supreme Court ruled that the commutation money for immigrants was unconstitutional and therefore void, thus closing the funding source for the Commissioners of Emigration— and for Chautauqua County. The debt was never paid. Despite its best hopes for prosperity, neither the county nor its immigrants ultimately benefited from the New York and Erie Railroad and its “Emigrant Train.”