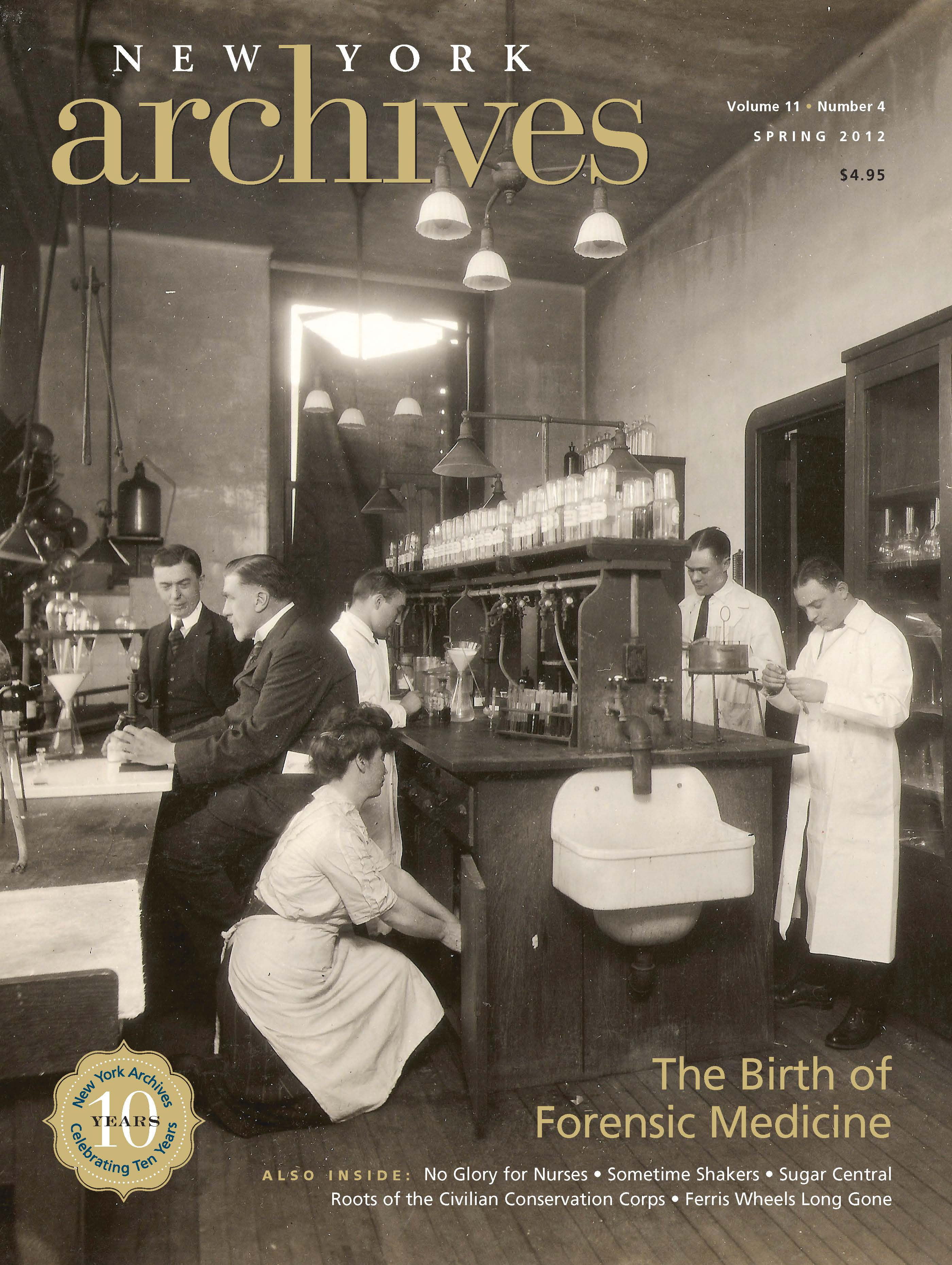 Forensic Trailblazer
Deborah Blum
In 1918, New York City’s chief medical examiner revolutionized both the department and the science of forensics.

A Shaker Family Story
Ann Sayers
A western New York family came east to live among the Shakers and found a mirror of Shaker communities everywhere.

Lost Amusement Parks of the Hudson Valley
Wesley Gottlock
A photo essay records the Valley’s pursuit of leisure in the early twentieth century.

A Place for Women
Carol Kammen
During the Civil War, nursing became a legitimate profession for women––some Tompkins County women among them.

Gilded Sugar
Martin L. Schneider
How sweet it was: the sugar business was both popular and profitable in Brooklyn during the Gilded Age

Forests for the People
Diane Galusha
FDR’s advocacy of forest conservation began in New York and carried over to the national stage.

Forests for the People

There are no confirmed reports that Franklin Delano Roosevelt ever actually hugged a tree, but there’s no denying he was passionate about growing them.

Between 1912 and 1943, FDR orchestrated the planting of more than half a million trees on his family’s thousand- acre Hudson Valley estate. Neither the demands of public office nor the challenge of a debilitating illness deterred him from making sure that American beech and Japanese pine, white cedar and black walnut, tulip poplar and balsam fir took root on Roosevelt land. Influenced by childhood treks through the forest with his father, inspired by the 300-year-old oaks that lined the drive to Springwood, their Hyde Park, Dutchess County home, and enthused about the prospect of financial return from the ultimate renew- able resource, FDR annually ordered trees by the thousands from state-run nurseries.

In 1910 he was elected to the New York State Senate, where he was appointed chairman of the Senate Committee on Forestry. Like many New Yorkers of his age, he had seen the effects of the destructive tanning and wood-acid industries, which had cleared entire mountainsides and practically eliminated the hemlock tree. He had watched the gradual decimation of the state’s woodlands by uncontrolled logging to meet the demands for housing, furnishings, railroad ties, and fuel. Forest fires took a terrible toll, and rivers often ran brown from soil washed off barren hillsides. To protect Springwood from these natural and man-made disasters, beginning in 1911 FDR hired expert foresters to advise him on which species to plant where, and later in the decade served as vice president of the New York Forestry Association. In the Twenties, he urged his neighbors to band together to come up with a cooperative planting plan, and in 1926 he established a Christmas tree plantation at Springwood. Within a decade, hundreds of Norway spruce were being harvested each year and sold to wholesalers, who paid from fifty cents to $3 per tree.

In the 1930s, now-Governor Roosevelt welcomed professors and students from the New York State College of Forestry at Syracuse University, who at Roosevelt’s private expense planted 60,000 trees in scientifically managed experimental plots on 250 acres of the estate. Even while he was in the White House, FDR ordered staff at Hyde Park to ship trees to distinguished colleagues; in 1943, the Crown Princess of Norway and British Prime Minister Winston Churchill received Springwood greenery.

Preservation-Conscious
A penchant for the outdoors was apparently a family trait. FDR’s fifth cousin, Theodore, is widely recognized for his contributions to environmental protection and preservation. During his brief tenure as New York governor from 1899 to 1900, Teddy Roosevelt signed the 1900 Davis Palisades Act, which created the Palisades Interstate Park spanning New York and New Jersey, and signed legislation extending the State Forest Preserve in Delaware, Greene, Sullivan, and Ulster Counties. While Teddy was in the White House from 1901 to 1909, approximately 230 million acres of the United States were placed under public protection in the form of five new national parks, fifty-one wildlife refuges, sixteen national monuments, and extensive national forests and other reserves.

An important precedent for both Roosevelts’ public efforts was creation of the Adirondack and Catskill Forest Preserves in 1885 by the New York State Legislature, which protected some of the most vulnerable areas in New York from destruction. While Teddy was president, the first reforestation project in the state began on Arbor Day in 1901 in the Catskills, where spruce and pine seedlings from Cornell University’s College of Agriculture were planted on a denuded patch of Wittenburg Mountain’s north slope in Ulster County. The following year, the first large-scale state nursery was established at Brown’s Station in the Town of Olive. That nursery was discontinued in 1906 (and is now submerged beneath the Ashokan Reservoir), but ten more nurseries were eventually sited around the state to supply the growing need for reforestation stock.

In the 1920s, legislation and bond issues enabled the state to purchase thousands of acres to add to the preserves and to create new state forest tracts elsewhere. Much of it was abandoned farmland whose owners had headed west, moved to the cities, or lost their hardscrabble acreage to foreclosure or taxes (during the last years of the 1920s, an estimated 600,000 people annually fled their farms). A number of public and private initiatives also encouraged reforestation. The Free Tree Bill of 1920 made seedlings available to municipalities for planting on government land in an effort to stabilize stream banks and curb erosion, and the State Conservation Commission (which became the Conservation Department in 1926) gave thousands of seedlings for demonstration projects to prove the value of converting “waste land” to productive timber stands.

In 1923, FDR encouraged two local Granges, Chapel Corners and Hyde Park, to purchase trees from the state because “almost every farm has some section of rocky or otherwise unsuitable land for crops which could be planted to trees which would in time have real commercial value.” In response, County Farm Bureau forestry committees held tours and educational field days at local tree farms.

A Fervor for Forests
One such event in August of 1924 drew thousands of people to Pine Grove Farm in Walton, Delaware County, where the speakers included T.C. Luther of Mechanicville, who was credited with planting 1.2 million trees that year on his 3,500-acre Saratoga County tract. State Forest Superintendent Clifford Pettis, a DeLancey native who developed the state’s tree nursery program, sold another400,000 tree seedlings to field day attendees.

The public was suddenly wild about trees. Young people were seen as the ultimate beneficiaries and were encouraged to invest in their futures by planting them. In Middlefield, Otsego County, 30,000 red and white pine seedlings were planted as a business venture in 1920 on a 127-acre tract owned by a consortium whose members were required to have at least one child under ten. (Today, Otsego County Forest Area #1 is popularly known as “The Forest of the Dozen Dads.”) Trees were sold for $1 per thousand to 4-H groups intent on blanketing shrubby fields in green. A forest-loving Congressman, John D. Clarke of Delhi, Delaware County, went one better by leasing ten acres of his property in 1928 for use as a 4-H Camp, whose “rent” was to be one hundred new trees planted on the property per year. Camp Shankitunk (said to be an Indian word for “woody place”) still welcomes young people every summer, and today includes a model forest. New York State also urged schools to plant forests as a way to reduce the burden on taxpayers; in Watson, Lewis County, a “school forest” of ninety acres was established by students planting 10,000 trees every Arbor Day.

Foresters estimated that, in forty years, a sixty-acre forest planted in white pine could yield $900 to $1,200 a year in lumber. But dollars were not the only possible benefit. Franklin Moon, dean of the New York State College of Forestry at Syracuse University, argued for the “spiritual influences” of forests in a society in which “millions of people are losing contact with outdoor life.” Students from the Raymond Riordan School in Highland, Ulster County, had another motivation in April 1921: they wanted to plant a living tribute to their Hudson Valley neighbor, famed naturalist John Burroughs, who had died the previous month. Directed by the Conservation Department to a former farm on Rose Mountain in the Town of Shandaken, Ulster County, they planted 14,000 trees and erected a monument to Burroughs, which still stands.

Such was the fervor for forests that FDR made it a campaign issue while running for governor of New York in 1928. “It is obvious that the future of the State depends on the proper use of every acre within the borders of the State,” he said in a speech at Jamestown on October 19. “It may be…that many of the farms abandoned…since 1920 should not be restored to agriculture, but should be especially used for the growing of a future timber supply for the people of this state.” Once elected, Governor Roosevelt and Conservation Commissioner Henry Morgenthau, Jr. (later Secretary of the Treasury under President Roosevelt) spoke frequently on the ecological, social, and fiscal benefits of statewide reforestation. They felt it would help transform substandard land into parks and woodlands for the benefit of residents and visitors.

“Hurrah for Trees!”
The adoption of the State Reforestation Law of 1929 and the 1931 Hewitt Amendment to the State Constitution, along with a $19 million bond issue, made the idea a reality. The acts authorized the Conservation Department to acquire, by gift or purchase, “reforestation areas” of at least 500 acres of contiguous land to be forever dedicated to “watershed protection, production of timber and…recreation and kindred purposes.” These areas became the nucleus of the present-day State Forest system.

FDR’s victory for conservation in his home state did not go unnoticed elsewhere. “There is one thing about Governor Roosevelt…that we heartily approve,” read an editorial in a rural Iowa newspaper,“…the advocacy of reforestation, the planting of trees in the waste places of New York, and it might well be extended to all other states.” In a letter to Roosevelt, Governor George H. Dern of Utah voiced similar enthusiasm in three words: “Hurrah for Trees!”

In 1933, in his first act as president and architect of the New Deal, FDR took his state model to the national stage. Touting forestry and environmental restoration as a focus for jobs that could help pull the country out of the Great Depression, he convinced Congress to pass legislation creating the Emergency Conservation Work Act to establish a “civilian conservation corps to be used in… forestry, the prevention of soil erosion, flood control and similar projects.”

Over the next nine years, the Civilian Conservation Corps (CCC) employed 3½ million young men and veterans nationwide, 210,000 of them in 116 camps across New York State. They developed campgrounds and state parks, built recreational trails, and restored stream banks, projects we continue to appreciate and enjoy today. Not surprisingly, Roosevelt’s “Forest Army” also left a leafy legacy by planting 221 million trees.