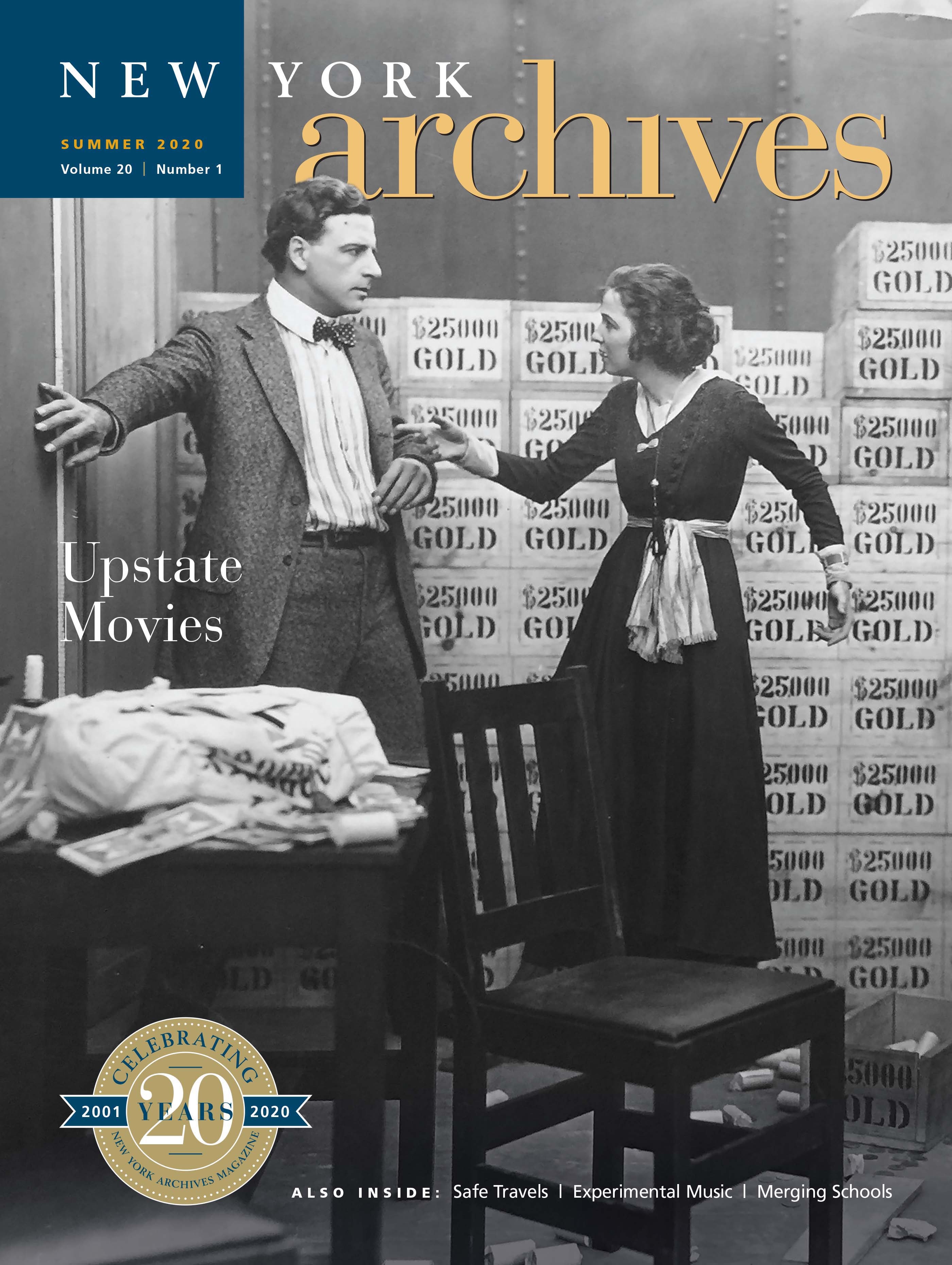 School Consolidation
Casey Jakubowski
Merging school districts bring out passionate opinions from residents in rural parts of the state, right down to the names of the consolidated districts.

The Art of Suffrage - History in the Making
Vicki Weiss
The editorial cartoon hits its stride right when the women's suffrage movement needed it the most, adding wit and humor to the cause. 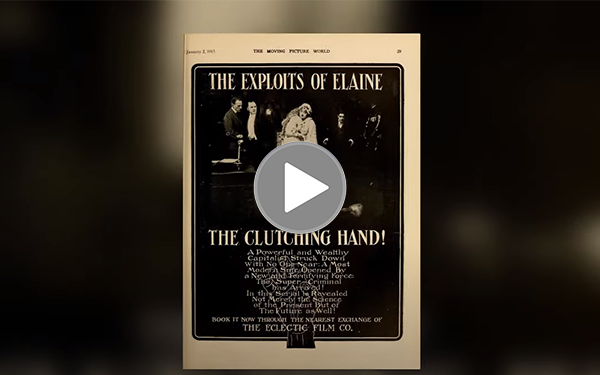 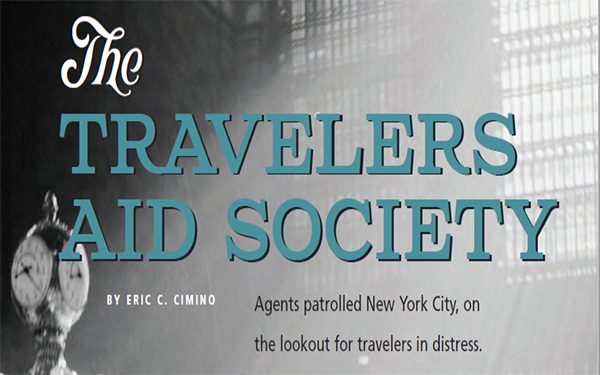 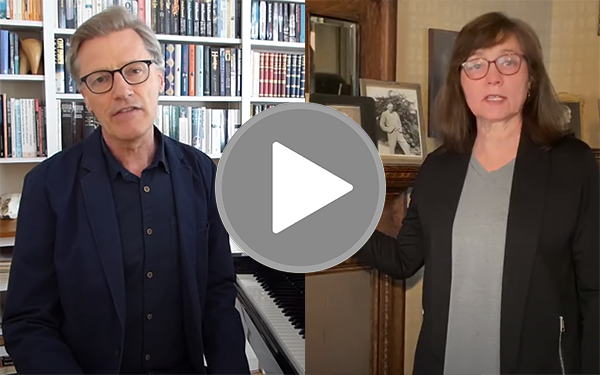 Agents patrolled New York City, on the lookout for travelers in distress .

In 1912, a young immigrant woman, having just arrived in New York City aboard an ocean liner, was trying to make her way to a train station so that she could complete the next leg of her journey. She hailed a taxi from the pier’s street-level exit and gave instructions to the driver. Just as the cab was pulling away, something unexpected occurred: A woman displaying a Travelers Aid Society (TAS) badge darted into the street, daringly stopped the taxi, and yanked the passenger from the car. After a tense exchange with the cabbie, the TAS representative took the young woman to the train station herself. Later that day, the young woman experienced another incident in which a stranger at the station picked up her suitcase and began walking away, urging her to follow. The bold TAS agent once again leapt into action, threatening to call the police if the man did not “put down the valise immediately.” The man complied and reluctantly handed over the traveler’s bags.

These scenes reveal the fascinating work of a little-studied Progressive Era organization, the Travelers Aid Society of New York, whose agents patrolled the city’s crowded train stations and piers, on the lookout for vulnerable travelers. The agent above pulled the traveler from the cab because she feared for the woman’s safety. She had encountered her at the pier earlier and knew that the woman spoke little English and was unfamiliar with the city. The young immigrant was therefore at great risk of being exploited by New York’s criminal underworld.

For the TAS, the worst-case scenario was that unsuspecting European or Euro-American women would be abducted and trafficked, a phenomenon known at the time as “white slavery.” The cabbie might take her to the train station or, more ominously, to a brothel.

The Travelers Aid movement to combat white slavery originated in London with the activism of the Young Women’s Christian Association (YWCA) in the late nineteenth century. It soon spread to the United States. By the twentieth century, the YWCA was sponsoring travelers’ aid in cities such as Boston, Chicago, and New York. Parallel to these Christian efforts, the Council of Jewish Women also provided its own brand of travelers’ aid services.

In 1907, the philanthropist and social reformer Grace Hoadley Dodge founded the Travelers Aid Society of New York with thirteen other prominent women. In contrast to the afore-mentioned groups, the TAS was proudly non-sectarian; members of its leadership, workforce, and clientele were Protestant, Catholic, and Jewish. At a time when social welfare organizations were often established along strict religious lines, the TAS was one of the few that attempted to unite a broad swath of New York’s reform community.

Dodge and her cohort secured a brownstone building on East 48th Street to serve as headquarters and assembled a staff of fourteen female social workers (agents) to carry out field work. Agents were expected to live at the headquarters and were paid a salary that ranged from $65 to $75 per month. The TAS received donations from prominent New Yorkers, including Dodge, the number one donor.

Social Workers
Agents spoke a variety of languages, including German, Russian, Yiddish, and Italian, which indicates that many were themselves immigrants or daughters of immigrants. The 40-year-old agent Antoinette Berrer, for example, was from Maine, but her parents were German and Swiss. In 1916, the TAS added a black woman, Anna Rich, to its roster. Rich came to the TAS after being let go by her previous employer, the White Rose Mission, an African American-led organization that had been forced to eliminate its travelers’ aid office due to budgetary constraints. Black women like Rich were well aware that trafficking, despite often being labeled “white slavery,” affected more than just white women.

Most of the Travelers Aid Society’s representatives were single, though some were married and lived off-site. The Italian-American agent Josephine Garino was listed in the 1920 United States Census as a 38-year-old married social worker and the mother of twin 13-year-old boys. She lived with her family on Manhattan’s Columbus Avenue in a rented apartment. Social workers like Garino were classified in the Census as “semi-professional” and shared a similar status with fortune tellers and racetrack managers. This reminds us that in the early twentieth century, social work was still a professionalizing field and its largely female practitioners occupied a tenuous position between working class and middle class.

Agents were expected to have “some degree of education” because they were responsible for writing detailed case reports. Mary Dean Adams, a member of TAS’s first cadre of social workers, was an 1899 graduate of Smith College. More important than education, however, was whether prospective agents had the physical and mental stamina to cope with the long days out in the field and the related emotional stress.

They also frequented the piers that spanned the Hudson River from the Battery in Lower Manhattan up to West 22nd Street. At the stations and piers, agents were on the lookout for single female travelers who seemed disoriented and confused. Agents also took notice of especially youthful and “pretty” girls. The idea was to get to them before a stranger with ill intentions did. In a typical TAS scenario, once a vulnerable traveler was identified, the agent would approach and offer help. If the client planned to stay in the city, the agent would escort her as quickly as possible to the given address. If she was leaving New York for another destination, the agent would walk the traveler to her connecting train or ocean liner. Passengers who were stranded in the city were taken to various women’s residential facilities, like the YWCA or the Hebrew Relief Society on East Broadway, where they could stay the night. After 1909, women could also stay in the TAS’s own residential facility, where they could get assistance obtaining permanent housing and respectable employment (usually domestic service).

Aura of Authority
Since the goal of TAS work was to prevent trafficking, this meant that agents did sometimes have to confront men, and occasionally women, who appeared to threaten their clients.

Agents had no official police power, but they did sport badges that projected the aura of authority and they often worked in cooperation with the police.

Three cases from 1912 reveal how agents responded to situations involving men and women of questionable motives.

At the piers, the TAS was aware of a notorious woman who canvassed the area with an outdated “note of introduction,” looking for girls to lodge at her boarding house that apparently doubled as a brothel. One particularly confident agent approached the woman and, acting like an officer of the law, confiscated the fraudulent letter. In another case, the TAS received a tip from a train station official that a man was following a young Dutch woman at a train station. When the man saw the TAS, he quickly fled and the girl was taken to the headquarters, where agents made contact with her family in South Dakota. Meanwhile, the stranger, having learned of the girl’s whereabouts, began harassing the TAS representatives in person, claiming that he was “caring for her at the request of her cousin, a friend of his abroad.” The agents ceded no ground and fended off the man’s “vigorous attentions.” Similarly, a desperate young man at the docks pleaded with an agent to reveal the name of “an attractive nineteen-year old girl” with whom he had become obsessed during an overseas journey. The woman was already in TAS care and the agent refused to divulge any details.

Not all cases worked out so well. One Italian woman whom the TAS had earlier helped leave New York fell into the wrong hands when she reached her final destination. She was found by the local Immigrant Protective League living in a “disreputable house,” most likely working as a prostitute. In a second noteworthy case, the TAS encountered a young woman with no money, baggage, or ticket near Pier 54. She was headed out west, where she was to be married. Agents approached her, but she refused their help, determined to go it alone. The TAS report on the case concluded that if the woman had only accepted some advice and guidance, “There would have been no thrilling story—just a girl saved.”

Caution should be taken to not assume that female travelers were always the innocent victims of unscru- pulous men. For example, one young woman, while being escorted to headquarters, “slipped away” from an agent so that she could reunite with a man with whom she had begun a relationship aboard an ocean liner. The agent, anticipating trouble, had earlier taken the man’s hotel address from the ship’s records. When the pair arrived at the hotel, the agent blocked their entrance, despite the woman’s protests. Likewise, an agent separated two new acquaintances at a train station in 1916. Outraged, the man involved claimed that the TAS had violated his “right to befriend the girl.” In these cases and others, the TAS thwarted single women’s (and men’s) attempts to assert their independence.

Toward Independence
On the other hand, when the TAS encountered runaways who claimed to have been abused or neglected at home, the society worked to transition them toward independence. An agent met a 16-year-old American in 1912 at one of the city’s rail terminals. According to the girl, she had fled home because she was the victim of “frequent punishments.” Instead of returning her to her parents, the agent took the girl to headquarters where she stayed until the Society procured her employment. Another case from the following year involved a young woman who explained to agents that she had been “turned out of her home owing to the domestic difficulties of her father and step-mother.” Her family told her to “never return, and that they did not care what became of her.” Trusting the woman’s version of events, agents brought her to headquarters, where she was “counseled until her courage to face the world alone returned.”

In subsequent decades, as the country’s dominant modes of mass transportation changed, the TAS adapted its services accordingly.

Post-World War II, it operated out of the Port Authority Bus Terminal and on the streets of nearby Times Square. It dropped the emphasis on protecting single women travelers and increasingly encountered both young men and women stranded in the city (hippies in the 1960s and runaway gay teenagers in the 1980s for example). Today, the TAS can be found in New York in Terminal Four of John F. Kennedy International Airport, still on the lookout for travelers in distress.

The records of the Travelers Aid Society are held at the New-York Historical Society in Manhattan. They include annual reports, meeting minutes, and photographs from throughout the TAS’s history. The Sophia Smith Collection of Women’s History at Smith College in Massachusetts has the papers of TAS founder Grace Hoadley Dodge. Information about individual TAS agents was gleaned from the United States Federal Census through Ancestry.com. The New York Public Library’s Schomburg Center for Research in Black Culture houses the documents of the White Rose Mission, an organization that provided travelers aid to African-American women arriving in New York from the South.