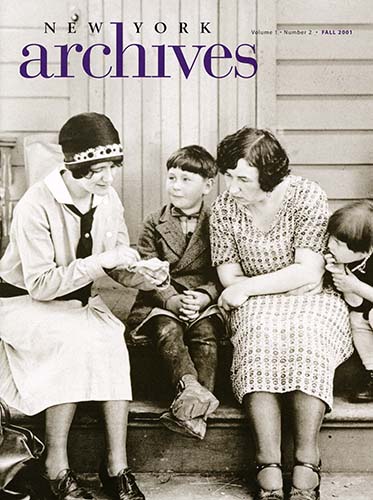 The State Archives: Saving Our Endangered Heritage
John Suter
Making sure that tomorrow we know what happened today

Liberty High School: Learning from the Past in Building a Future
Paul Grondahl
From total chaos in their homelands to a Manhattan classroom, immigrant students learn from archives

Writing and "Righting" the History of Woman Suffrage
Mary E. Corey
A woman suffrage historian gets lost in history—almost

Through a grand historic irony, one of the women most instrumental in the preservation of woman suffrage history has, herself, been largely overlooked in the histories of this movement.

Matilda Joslyn Gage was one of three National Woman Suffrage Association (NWSA) founders known to their contemporaries as the "triumvirate;" leaders who organized the work, set the agenda and, most importantly, preserved the records of the nineteenth-century woman suffrage movement.

With Elizabeth Cady Stanton and Susan B. Anthony, in 1876 Gage began to prepare for publication the History of Woman Suffrage. The first three volumes of this work, compiled over the ten subsequent years, are the seminal resource for historians researching this movement. Gage's role in that work alone should have guaranteed her a place of honor in our collective memory of the suffrage past. Instead, it has obscured her part in this and other movement histories.

Volumes I, II, and III preserved the work of the National Woman Suffrage Association from the beginnings of the movement to about 1883. Gage's contributions to these three volumes cannot be overestimated. Her essays, "Preceding Causes," "Woman, Church and State," and "Woman's Patriotism in the War" begin and end each volume; fully the first third of Volume III comes from Gage's newspaper, the National Citizen and Ballot Box. These materials are just the beginning of what easily can be traced directly to Gage.

Unfortunately, Volume IV was prepared after the bitter disagreement between Anthony and Gage over merging the NWSA and the American Woman Suffrage Association (AWSA). It was also prepared after Gage's death, and covers the NWSA's most active years and those spent writing the History. Volume IV minimized Gage's activism and her contribution to the History. For this reason, modern historians who have relied on Volume IV's description of her work have also tended to minimize Gage's contribution.

The rift between Gage and Anthony had its roots in the circumstances surrounding the formation of the NWSA in 1869. Immediately following the Civil War, the reform alliance between abolitionists and women's rights advocates crumbled in the fierce in-fighting over suffrage priorities. Unable to prevail on the issue of suffrage, Stanton, Anthony, and Gage left the final American Equal Rights Association Convention in May 1869 and held an impromptu evening session. There they agreed to concentrate fully on woman suffrage by forming the National Woman Suffrage Association.

The three were soon reviled by the Boston contingent headed by Lucy Stone and Henry Brown Blackwell, for what was perceived to be a purposeful attempt to exclude them from the new suffrage organization. As a result, Stone and Blackwell formed their own association, the American Woman's Suffrage Association, the following November. The two associations remained bitter rivals for the next twenty years.

Over the course of those years, however, it would become clear that Anthony had a vision both larger and smaller than Stanton's and Gage's. Larger, in that she knew implicitly that the NWSA would need broad-based support in order to accomplish its goals. And smaller, in that, for her, NWSA had only one goal: woman suffrage.

By the late 1880s, Anthony had begun to pursue women's groups that had formerly been anathema to the NWSA: the AWSA and the Women's Christian Temperance Union. Overtures to merge the NWSA and the AWSA began circulating during the years just prior to the 1889 NWSA Convention, but none were taken seriously as long as Gage remained the Chair of its executive committee.

In 1889 Anthony pleaded reduced resources and denied Gage's travel expenses to the Washington meeting. Anthony did not reveal that she had received a new proposal from the AWSA that she was determined to accept on behalf of NWSA.

Anthony waited to address the merger proposal until the last evening of the convention, after most delegates had already left. She then boldly assumed Gage's office, in order to bring the merger proposal before the executive committee, and argued strenuously against allowing the members to vote on it.

It was an outrage!
Anthony had argued on behalf of woman suffrage for forty years, and now denied its necessity within the suffrage association itself. Gage raised a storm of protest, but the majority of the members accepted the move as a fait accompli. At that, Gage quit the NWSA and formed her own organization.

One of the more important long-term effects of the merger was the loss of Gage to the historic record, a truly monumental loss. Her consuming passion was to make the world a better place for her daughters and her son. Whether that struggle meant arguing with Ezra Cornell to admit women to his college, organizing the women of Fayetteville to elect women to the school board, or hanging funeral crepe from her front porch to protest rather than picnic on the Fourth of July, Gage lived her ideals. Further, her own magnum opus, "Woman, Church and State," is the only historic monograph to emerge from the nineteenth-century woman suffrage movement. Indeed, it is the first volume in what would later be known as women's studies. Through her activism, her newspaper, her work on the History of Woman Suffrage, and her "Woman, Church and State," she bequeathed a living legacy to the future. That legacy should not be lost.

One Suffragist's Beginnings
The story of Matilda Joslyn Gage begins on a crisp September afternoon in 1852. The women at the Syracuse Woman's Rights Convention watched as the young newcomer from Fayetteville inched her way toward the podium to deliver her first speech.

Although not scheduled to speak and unknown to the assemblage, she approached the podium "when her courage had reached a sufficiently high point. With palpitating heart she ascended the platform, where she was cordially given place by Mrs. Mott. . ." Lucretia Mott later recalled that she was "trembling in every limb."

Gage began, "This convention has assembled to discuss the subject of woman's rights, and form some settled plan of action for the future. Let Syracuse sustain her name for radicalism!"

With these words, Gage launched her life's work in women's rights as a speaker, activist, and historian. In her judgment, history offered important insights into the status of women analogous to other previously dependent groups. She argued that in an earlier day "science and learning were in the hands of the priests, and property held by vassalage. . . education was held to be unfit for the masses [and] kept them in a continual state of dependency."

These same kinds of forces conspired to keep women of her day dependent. Implicitly she empowered women to use the precedents of the past to inform their present and shape their future. Her analysis of the marriage laws showed that even in woman's designated "sphere" she was powerless. In laws determining inheritance rights, real and personal property, as well as wages, married women were classed with "idiots, persons of unsound mind, and infants."

"Every father," she stormed, "has a right to bind, or give away, any of his children without the consent, or even the knowledge of the mother; and when he dies, she is not considered a competent guardian . . . in his will, or deed, [he can] exclude the mother from participation in guardianship." Gage stressed that women could and must use, manipulate, and interpret the past in their own self-interest.

Lucretia Mott was so impressed with Gage's speech that she arranged to have it published with the other convention tracts. From her first speech, Gage brought a historian's perspective to bear on the tasks before her. She became and remained the acknowledged historian of the movement for the next half-century.

The information in this article is drawn from the writings, correspondence, newspapers, and speeches, etc. of the woman suffrage movement housed and on microfilm in the following archival collections: The Matilda Joslyn Gage Papers, Women's Studies Manuscript Collections, Schlesinger Library; The Records of the National American Woman Suffrage Association, Manuscript Division of the Library of Congress; The Papers of Elizabeth Cady Stanton and Susan B. Anthony, edited by Patricia G. Holland and Ann D. Gordon; and the Papers of the New York State Woman Suffrage Association, Rare Books and Manuscripts Division, Columbia University.