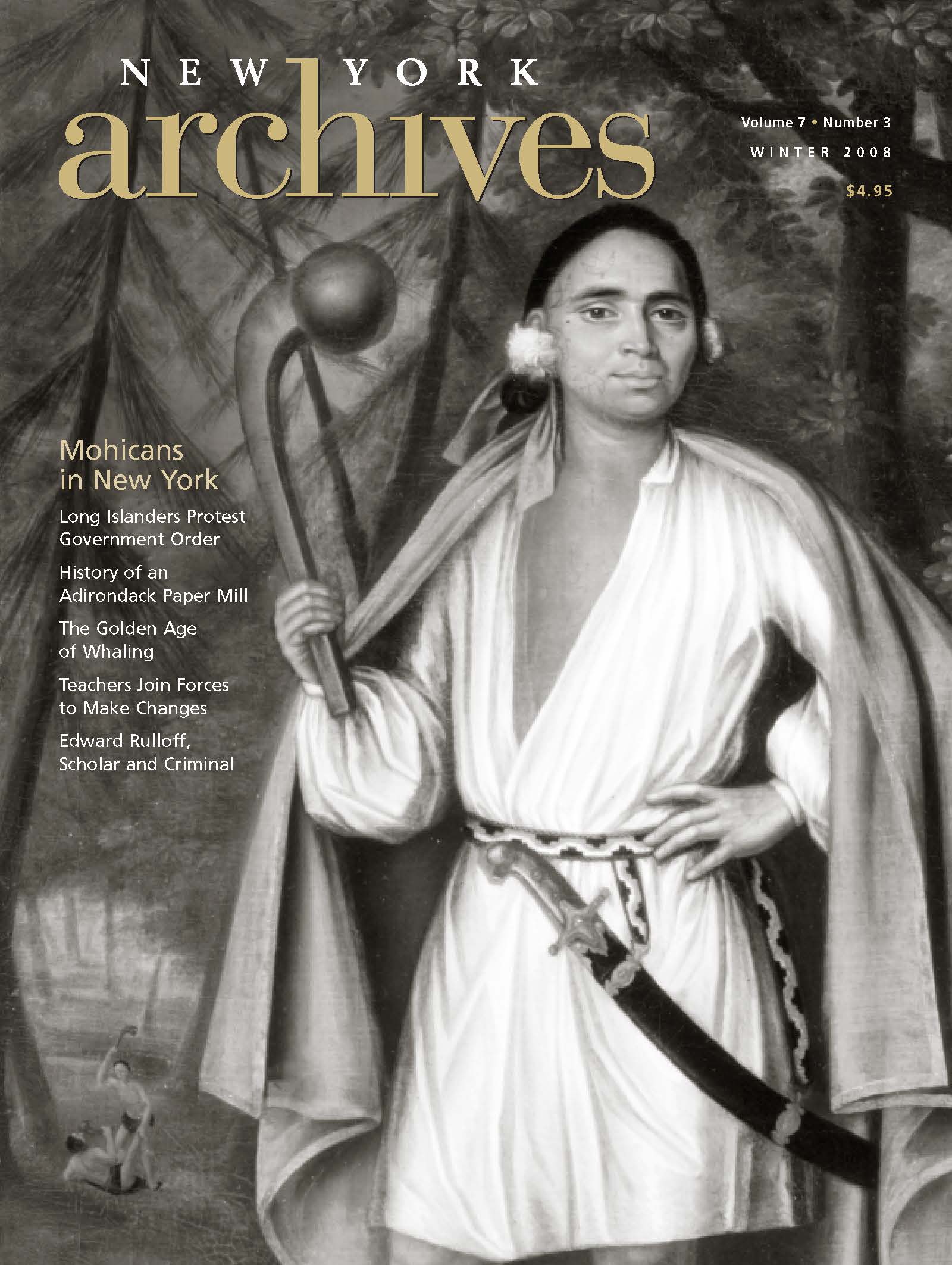 A Peaceful Indian Nation
Shirley W. Dunn
The Mohican Nation existed well before the American nation—and New York State owes its existence, in part, to the Hudson Valley Mohicans, from whose land the state was born

Hudson River Paper Mill
Stephen Cernek
A photo essay on a now-lost 133-year-old paper mill in the North Country, a significant base for the international paper manufacturing industry

Teachers United
Dennis Gaffney
The effects of the modern teachers’ movement from the 1960s are still being felt by students, administrators, labor, and politicians throughout New York State––and the nation

Hunting Down a Rogue
Richard W. Bailey
The author went looking for Edward Rulloff, the “learned murderer” who was hanged in Binghamton in 1871. And then Rulloff came looking for him. 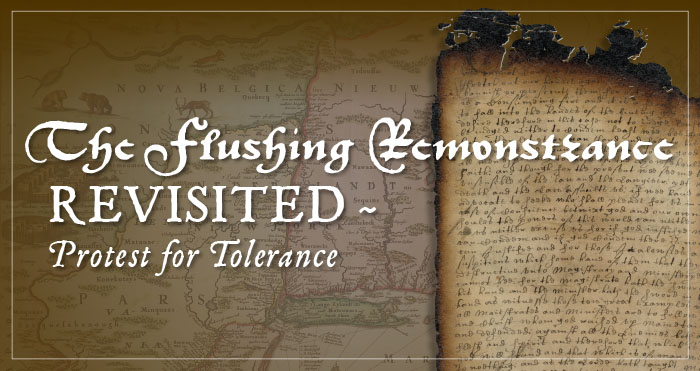 The Importance of Flushing

Considering its significance—considering how foundational it is to American history, to the root idea of a free society that we all take for granted—the Flushing Remonstrance is a document that gets very little respect. It could have something to do with the name: it’s an awkward mouthful, is it not? In the first place, we must admit—and forgive us, residents of a certain city in the borough of Queens—that if “Flushing” stirs something in people, it is not especially lofty. As to “remonstrance,” it might be interesting to query your co-workers or members of your family to see how many can give you a reasonably close definition of the word. Perhaps calling it The Long Island Protest would have gotten the document bigger play over the centuries. Or something poetically in keeping with its era (only a few decades from that of Shakespeare): say, The Complaint of Conscience.

Let’s both put this remarkable piece of paper in context and outline its significance. Flushing—the city in Queens—was originally Vlissingen, after a Dutch city of that name. It was part of the Dutch colony of New Netherland, which stretched across the Middle Atlantic region of what would become the United States. New Netherland is best remembered today for its capital—New Amsterdam—which became New York City, and for its last director, Peter Stuyvesant.

The Dutch brought several things to the region they colonized. Most notable was an idea they more or less invented in the seventeenth century: “tolerance.” As everyone knows, the Dutch provinces are mostly below sea level, and this geographical fact meant that they were a relatively easy place to invade or run to. Thus, throughout the 1500s and 1600s, Europeans fleeing war or seeking freedom to think or write or worship made their way to the Low Countries. As a consequence, the major Dutch cities— Amsterdam, Rotterdam, The Hague, Utrecht—became multicultural centers. The idea of tolerance developed not through lofty ideals but as a way for these disparate peoples to get along with each other. At the same time, the Dutch found that it worked: tolerance allowed a mixed society not only to get by but to do business, to flourish. It became one of the keys to the success of the Dutch Golden Age.

This idea got transferred to the New World colony. One of the principles of Dutch tolerance was freedom of conscience. According to Dutch law, you couldn’t be harassed because of your religious beliefs. Naturally, not everyone went along with this. In fact, a goodly portion of Dutch society thought it was exactly the wrong approach. In this, they were only following what was common belief nearly everywhere. The seventeenth century was the age of religious war, when it was almost universally held that in order for a society to be strong it had to be unified, particularly in matters of religion. Religious intolerance was thus more or less official policy in England, France, Spain, and elsewhere.

Peter Stuyvesant—the son of a Calvinist minister—was among the Dutch who were also of this mind, and to be fair he had good practical reasons for it. He was the ruler of a small, weak colony that was surrounded by would-be enemies: Indians, but most dangerously of all the English to the north and south. Unlike the English colonies, New Netherland comprised a mixture of nationalities and religions. Stuyvesant believed this weakened it, and no doubt he was right; bickering among different ethnic and religious groups was more or less constant. He tried, therefore, to keep the tolerance in check. When Jews arrived in 1654, seeking asylum, he barred them from settling. The Jews went over his head, however, appealing to the directors of the West India Company, which administered the colony, and to the provision in Dutch law that dictated freedom of conscience. Stuyvesant was overruled, and had to allow the Jews to remain. (He managed to make their lives miserable, though, so that most eventually left.)

Then, in 1657, the issue came back in a new form. The Dutch colony had been receiving more and more English settlers, thanks in large part to the fact that the Puritan rule in England (and New England) meant that those of other religious persuasions were unwelcome there. Many of these non-Puritan English pilgrims thus settled in parts of the future boroughs of New York. One such group was the Quakers, whose penchant for spirit-fueled frenzy—quaking—caused some residents discomfort. Stuyvesant in particular seems to have felt they were out of their minds; at any rate, he believed their form of religious belief was a threat to the public order, and in 1657 he barred the town of Vlissingen from allowing them to settle. In response, the English residents crafted a complaint, or remonstrance. The most memorable phrase from the Flushing Remonstrance, to my mind, is the one in which the residents appeal to “The law of love, peace and liberty in the [Dutch] states extending to Jews, Turks, and Egyptians, as they are considered the sonnes of Adam, which is the glory of the outward state of Holland…”

The inhabitants informed their leader that “our desire is not to offend one of [God’s] little ones, in whatsoever form, name or title he appears in, whether Presbyterian, Independent, Baptist or Quaker, but shall be glad to see anything of God in any of them.” Therefore, they went on, “if any of these said persons come in love unto us, wee cannot in conscience lay violent hands upon them, but give them free egresse and regresse unto our Town, and houses, as God shall persuade our consciences.”

This is an outright statement of religious freedom, and it is a watershed. But let
me add something else. It has often been misinterpreted in American history as being an English-versus-Dutch statement. That is, it has been viewed in terms of “the English believe in religious liberty, while the Dutch do not.” This is simply wrong. The context was Dutch. The laws to which the residents of Vlissingen/Flushing appealed were Dutch laws. The situation is unique to New Netherland—and thus to New York. Its Dutch character is one reason why New York grew into a vibrantly multiethnic culture: one reason why New York became New York. The English of New England undeniably gave us their language and many aspects of government, but they were at this time in American history very far from enunciating such an ideal of religious freedom. What we see in the Flushing Remonstrance is a fledgling American colony applying hard-won rights from the Old Country to a New World setting, where they would flourish in an entirely new way. The mixed peoples who founded New Netherland would become a wellspring of American religious liberty, and also a source of America’s notion of equality.

Many places in the world today still have state religions and bar faiths other than the approved one. When Americans want to tally the things they value most in their society, the things to be proud of and hold close, the Flushing Remonstrance—by whatever name—should be high on their list.