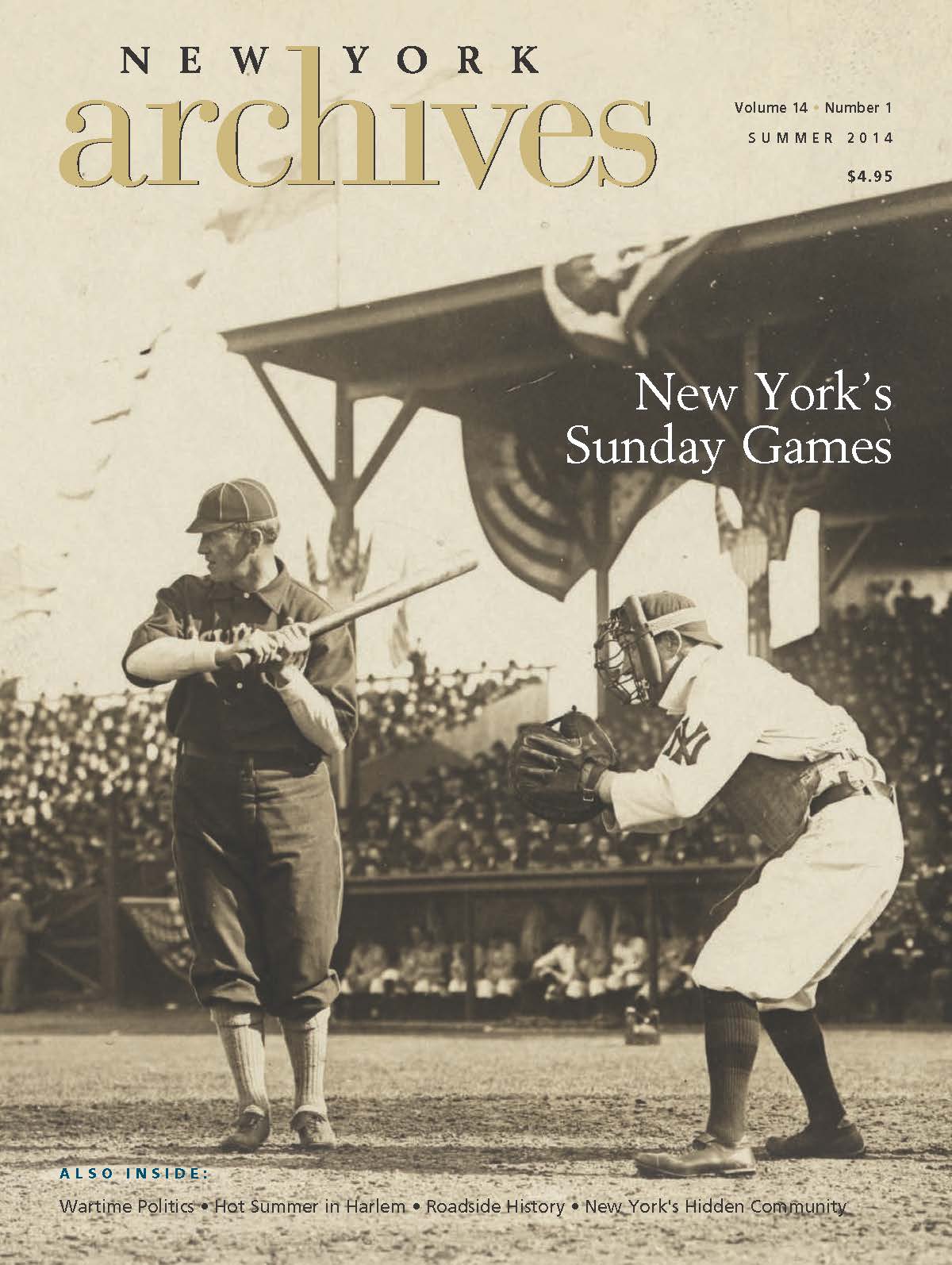 How New York Got Sunday Baseball
Charles DeMotte
At the turn of the century, Sunday was a day of rest— and possibly baseball.

Riot
Lawrence R. Samuel
A turning point in the civil rights movement was the killing of a black teenager in Harlem by a white police officer.

Others Like Him
Vivek Bald
Habib Ullah was not the only South Asian Muslim in New York City in the 1920s.

How New York Got Sunday Baseball

The state’s 141-year-old blue laws forbade playing any games that might “interrupt the repose” of the Sabbath. But a State Supreme Court justice in Brooklyn and Charlie Ebbets had a different interpretation.

People who look forward to taking in a Sunday baseball game might be surprised to hear that such a pastime used to be illegal on the Sabbath. Although blue laws (which also banned Sunday shopping) varied considerably from state to state, New York’s Sabbath restrictions actually dated back to colonial times; the Statute for Suppressing Immorality, enacted in 1778 and essentially a copy of a 1685 colonial law, was the first state “Sabbath law.” Section 2145 of the revised New York State Penal Code of 1787 outlawed all public sports played on Sundays and remained in effect for almost 150 years, until its repeal in 1919.

However, interpretations of that section of the law gradually changed over time; some observers took it to mean that amateur Sunday baseball might be legal if played on private grounds or if it did not contravene Section 265 of the Penal Code, which prohibited games that interrupted the repose of the community on the Sabbath. Such was the interpretation given by Judge William J. Gaynor, who rendered an opinion to the New York City Police Commissioner in July 1894 concerning the arrest and incarceration of several boys found playing baseball in a park on Sunday (they were let go). Ten years later, Gaynor, by then a State Supreme Court justice in Brooklyn, handed down a similar decision, to the effect that baseball could be played within the borough on Sundays unless there was a specific complaint showing that the peace and religious liberty of the community had been disturbed.

Legal Drift
Following Judge Gaynor’s 1894 opinion, which also curtailed the use of police power with respect to Sabbath-breaking, the authorities drastically cut back their efforts to interfere with Sunday baseball. Even when arrests were made, magistrates were unwilling to prosecute unless there was a flagrant violation of the law, such as rowdiness or public drunkenness. In dismissing numerous charges against ballplayers, magistrates cited lack of evidence or the reluctance of interested parties to press charges. The most vocal and persistent opposition to Sunday baseball came from Protestant religious groups. America at that time was predominately a white Protestant nation, and many evangelicals considered their values essential to the American way of life. In response to real or perceived violations of the blue laws, groups such as the Sunday Observance Association, the Lord’s Day Alliance, and various ministerial associations were formed, which had their roots in local church congregations but eventually became effective statewide lobbying organizations.

However, the dramatic increase in the number of amusements and pastimes besides baseball resulted in a host of legal inconsistencies. Since hunting, golf, cycling, and fishing, though forbidden under the New York Penal Code, were solitary sports, they posed no threat to the peace of the community. Similar arguments were made regarding indoor activities. Yet in spite of many test cases and challenges to the contrary, there was no clear consensus across the state as to what was—or was not— permissible.

By the first decade of the twentieth century, as amateur and semi-pro baseball received a putative green light to operate discreetly on Sundays, blue law proponents began to focus on the professional game. To these evangelical critics of Sunday baseball, the commercialization of baseball prostituted the sport and catered to the lower classes. But it was economics, not morality, which drove club owners to find a way to stage Sunday games. For example, the need to raise funds led the directors of the Eastern League Syracuse Stars to explore that possibility, although similar efforts by the Rochester Red Wings to play at Windsor Beach near Lake Ontario were squelched by the Law and Order League of Irondequoit. The loss of Sunday revenues and continued harassment by the law and order crowd temporarily drove professional baseball out of Rochester.

Brooklyn Gets Game
Since baseball was disallowed (and so enforced) in Manhattan, New York club owners did not involve themselves with the issue. But after Charlie Ebbets, president of the cash-starved Brooklyn Dodgers, assumed ownership of the club in 1898, he began mulling over a number of schemes designed to evade the blue laws. On April 22, 1904, Ebbets inaugurated the first professional Sunday game in Brooklyn by ingeniously requiring each spectator to purchase a scorecard as the ticket for admission. His scheme was short-lived; the local Sabbath observance associations quickly lodged a protest that resulted in the arrest of three players. On the advice of counsel, Ebbets declared that no more games would be played until those cases were resolved.

When the cases came to court two months later, Supreme Court Justice Gaynor had no trouble upholding the charges by declaring that the mandatory sale of programs amounted to an admission fee. But the Brooklyn district attorney, John F. Clarke, while agreeing with Gaynor’s decision, believed that because of the important legal questions involved and the division of community sentiment on the issue, it was essential that the matter should be settled by the Court of Appeals. Unfortunately the court only affirmed Gaynor’s decision and didn’t rule on the larger questions. The drift in legal thinking about the blue laws, highlighted by subsequent court decisions, centered on the need to give greater clarity to Sunday observance.

Stymied in the courts, professional baseball turned its attention to the lawmakers. Since electoral apportionment greatly favored the rural upstate regions that were Republican strongholds, the Republicans, backed by the Sunday observance lobbies, were able to control the legislature and hence the legislative process, blocking the flow of blue law reform bills that were introduced in Albany. When the Democrats briefly gained control of the State Assembly in 1911, there was hope among Sunday baseball supporters that reform legislation would pass. However, in the wake of the tragic Triangle Shirtwaist Company fire, the legislature’s attention was diverted to working hours and industrial fire and safety regulations— which put Sunday legislation on the back burner.

At the same time, advocates of Sunday baseball received only lukewarm support from the governor’s office. Republican governors had no interest in changing the law; similarly, Democratic governors like John A. Dix and his successors, most of whom were essentially appointees of Charles F. Murphy’s Tammany Hall machine, were noncommittal about Sabbath reform and therefore shy about pressing for changes in the law.

Throughout these legislative battles, Charlie Ebbets bided his time. Over the preceding decade he had built a new ballpark, Ebbets Field; hired a competent Dodgers manager, Wilbert Robinson, who won a first-time National League pennant for the club in 1916; and survived a short-lived challenge from the Brooklyn club of the recently defunct Federal League. But Ebbets was sparked to action by a plan arising from league meetings in Chicago in May 1917 to play Sunday games in eastern cities and donate proceeds to the U.S. Army.

In the summer of 1917, three months after the U.S. entered World War I, Ebbets decided that the time was ripe to stage Sunday baseball, with all proceeds going to a charitable organization connected with war work. This proved to be a bad miscalculation: he and manager Robinson were arrested following a game against Philadelphia and were subsequently convicted for violating the Sunday observance law— not for charging admission, but for disturbing the peace.

Rest—and Recreation
After deciding to suspend the Sunday games, Ebbets turned his attention to politics. He started by sending a circular to candidates in the upcoming local and state elections in Brooklyn that asked for their position on the Sunday baseball issue. The returns were overwhelmingly favorable, and included strong letters of support from New York Mayor John Purroy Mitchel and the president of New York City’s Board of Aldermen, Al Smith—who, having served in the State Assembly for eleven years, would become the Democratic candidate for governor in 1918.

Next, Ebbets directed his message to the clergy. In a letter to each clergyman in Brooklyn, he carefully explained the position of his ball club in advocating Sunday baseball and solicited their views on the subject. He repeated the familiar arguments: the importance of conducting games in a mannerly fashion so as not to interfere with religious services, and the need to offer some form of entertainment for those who could not spare time from their work and had only Sundays for recreation.

All this spadework was a precursor to what opponents of the Sunday blue laws hoped would bring about their repeal. On March 5, 1918, Senator Robert R. Lawson of 15Brooklyn introduced a bill to grant local authorities the power to regulate public sports on Sunday. A month later the Lawson bill passed the Senate by a vote of 26 to 20. With the legislature poised to adjourn in a week, pressure was put on the Assembly to act quickly. But the opposition played its trump card when sixty-seven Republican assemblymen petitioned the Rules Committee to kill the measure, stating that it would not be in the best interest of either the state or the Republican Party to legalize Sunday baseball.

Advocates renewed their hope for repeal of the blue laws with the election of Al Smith as governor in November 1918. Smith, called a “shameless wet” by his opponents for his stand against Prohibition, made legalization of baseball on Sunday part of his election campaign. With little doubt that he would approve the measure, a new bill was submitted that virtually replicated the provisions of the Lawson bill in calling for local option. On April 4, 1919, it passed the Senate by a narrow majority, with the Assembly following suit. A subsequent flurry of local ordinances from around the state sanctioned Sabbath games.

On Sunday, May 5, 1919, record-breaking crowds poured into Brooklyn’s Polo Grounds and Ebbets Field to witness the first legal Sunday games in the history of the state. “There were men at the game yesterday,” stated the New York Times, “who, on account of their work during the weekdays, have not been able to see a major league game in years.” The rise in attendance afforded by the Sunday crowds at both major and minor league games enhanced the fortunes of the owners and provided a transition into New York’s “golden era” of baseball.

My research for this article first focused on important newspaper clippings in the Giamatti Library at the Baseball Hall of Fame in Cooperstown. I also consulted the papers of baseball historian Harold Seymour in the special collections of Olin Library at Cornell University, as well as papers related to Syracuse baseball at the Onondaga Historical Association in Syracuse. Material pertaining to the New York State Penal Code was in Cornell’s Law Library. I relied heavily on Ithaca newspapers on microfilm at the Tompkins County Public Library.

Many New York State newspapers from 1870 to 1924 are online at www.fultonhistory.com. The Sporting News, online at paperofrecord.hypernet.ca/papers.asp, proved to be an invaluable source. A broader access to newspapers, including the New York Times, is available from www.newspapers.com.