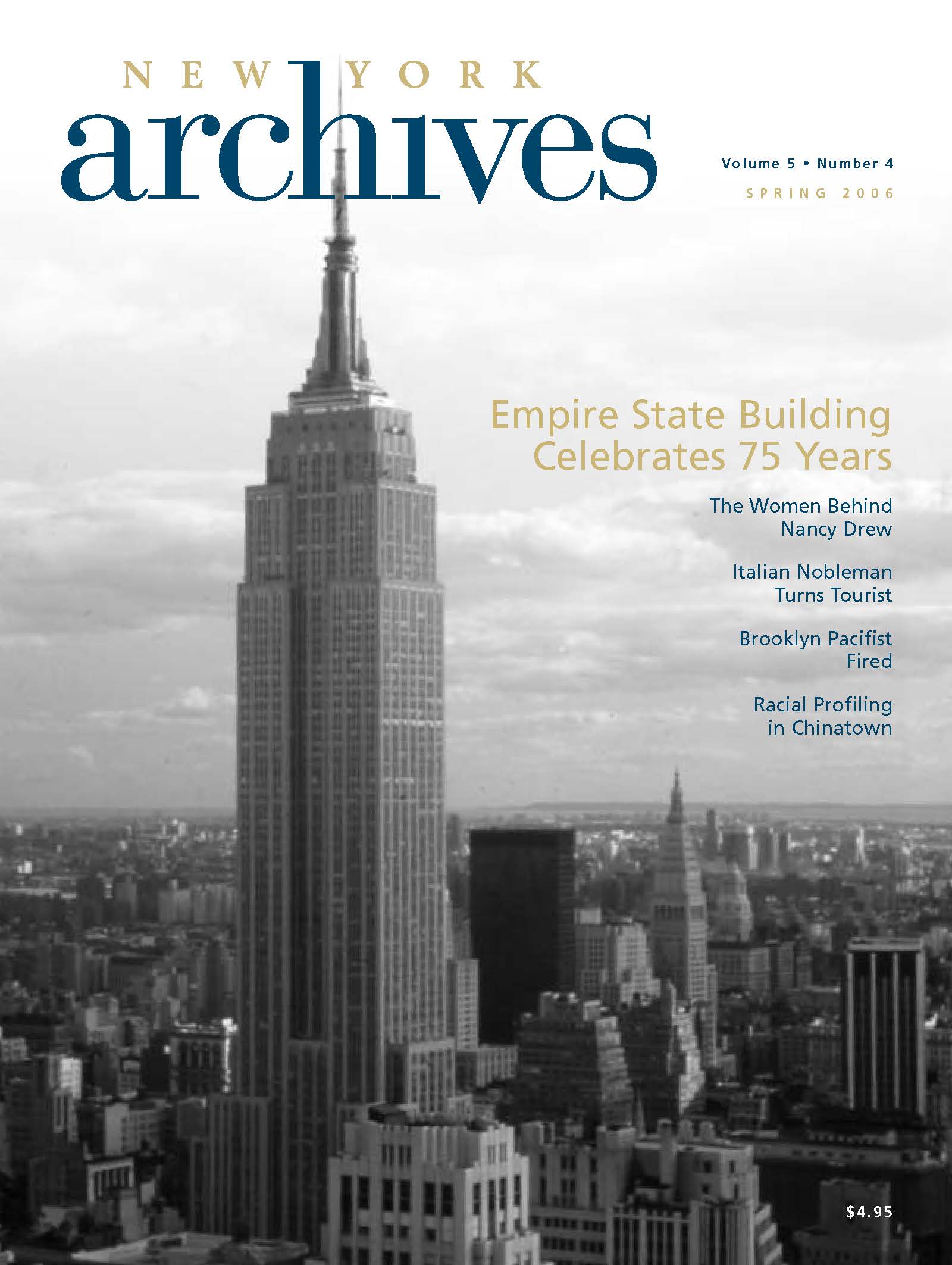 Entering America
Karim M. Tiro
Count Paolo Andreani wrote what was perhaps New York’s first travelogue in 1790, when he undertook a journey up the Hudson and turned west at Albany

The Case of the Independent Women
Melanie Rehak
In 1930, an intrepid blonde sleuth was the most popular heroine in America—because her female creators knew what young America wanted

Conscience in the Classroom
Charles F. Howlett
During World War I, at the peak of patriotic fervor, Quaker Mary McDowell taught high school in Brooklyn. What happened was predictable—and ultimately a victory for academic freedom.

Murder in Chinatown
Mary Ting Yi Lui
The 1909 murder of a young white woman in Lower Manhattan cast suspicion on Chinese men nationwide, reinforcing their public and legal status as both separate and unequal

The Case of the Independent Women

In the spring of 1930, just as America was plunging deep into the Depression, a brilliant, beautiful, and, most importantly, intrepid young woman appeared on the scene to lighten young America’s load. Her name was Nancy Drew, and even the price of her mysterious adventures—fifty cents a book, an amount that could almost always be gotten up even in hard times—was designed to delight.

Of course, there were also her soon-to-be-famous blue roadster, her doting lawyer father, her fashionable wardrobe, and her unerring sense of right and wrong to recommend her. But most of all, it was her independent, enterprising spirit that made her a hit from the very first moment she landed on bookshelves across the country. Over the course of her first three stories, published simultaneously as a “breeder set” to ensure immediate addiction among the ranks of her readers, Nancy investigated a missing will, saved a drowning swimmer, explored a haunted mansion (discovering a secret underground tunnel in the process), and restored a stolen fortune to its rightful owner. She was also locked up in a closet, knocked unconscious several times, and forced to escape by climbing down a prickly rose trellis in a skirt and heels. The Secret of the Old Clock, The Hidden Staircase, and The Bungalow Mystery introduced to America the bold sleuth who would become a mainstay of juvenile reading forever after. Even now, seventy-six years later, Nancy Drew remains a symbol of self-reliance, quick thinking in perilous moments, and modish independence. “If I get through, I must depend upon my own initiative,” she tells herself during an especially harrowing scene in The Bungalow Mystery. Trapped in a ferocious rainstorm and almost killed by a falling tree, she never loses her cool, and her moxie and charm are as appealing today as they were in 1930.

A Heroine Ahead of Her Time
How did this young detective manage to capture the imagination of American girls so quickly and hold onto it through wars, television, social upheaval, and the Internet? For one thing, she did it by being ahead of her time. She was the first teenage detective of her kind, a girl who, instead of moonlighting as a solver of mysteries while holding a day job as a traditionally feminine nurse or student, was able to devote herself fully to her own interests. She also did it by never even broaching the subject of marriage and motherhood—two topics which, it had become clear by the time she made her debut, made girls drop a series faster than a hot potato. Nancy Drew was, above all, a modern sleuth from the start.

All of this was according to plan. Her inventor was a series book mogul named Edward Stratemeyer, who, thanks to his unrivaled combination of entrepreneurial instincts and imagination, was already a millionaire when he envisioned his blonde, blue-eyed detective. As head of the tratemeyer Syndicate, a company that produced children’s series books by sending outlines to ghostwriters, each of whom wrote under a series pen name, he had dreamed up most of the major series of the previous decades, including Tom Swift (1910), the Bobbsey Twins (1904), and the Hardy Boys (1927). It was when girls began to write in about his boys’ series, saying how much they liked them—as well as how much they didn’t like the “weepy and weak” girl characters in his boys’ books—that he realized it was time to give them an adventurer of their own. Stratemeyer imagined Nancy as “an up-to-date American girl at her best, bright, clever, resourceful and full of energy,” and along with her, he invented her author, Carolyn Keene.

The Women Behind the Man
The secret of Nancy’s success lies in the women behind this famous pseudonym. When Stratemeyer initiated the Nancy Drew Mystery Stories, he assigned them to a young woman, Mildred Wirt, who was already writing his Ruth Fielding books (needless to say, Ruth fell by the wayside when Wirt got engaged to her long-time beau in the late 1920s). Wirt was a pithy, no-nonsense journalist from Iowa, and she invested Nancy with a good deal of her own gumption, not to mention her award-winning swimming skills and relentless energy.

A good thing, because a mere twelve days after the first three books in the series were published, Edward Stratemeyer died suddenly of pneumonia. His final creation was left in the hands of not only the feisty young ghostwriter he had hand-picked, but his two daughters, Edna Stratemeyer and Harriet Stratemeyer Adams, who took over their father’s company when a buyer could not be found. For Harriet, who had attended Wellesley in the years preceding suffrage, it was the opportunity of a lifetime to have the career she had desperately wanted but had been denied by her traditional parents and upper-class up bringing. Though she was married and the mother of four young children, she threw herself into professional life with zeal. As editor, Harriet helped to mold the Nancy Drew whom generations of little girls have admired and aspired to, endowing her with the graciousness and poise that are as much a part of her character as her uncanny ability to sniff out a mystery. Later on, when Mildred Wirt became a reporter at the Toledo Times and left her series-writing days behind, Harriet took over the writing of the Nancy Drew books, and left an even greater mark on the famous sleuth.

On Their Own
Both Harriet and Mildred defied great odds when they became career women in the early part of the twentieth century. Though it was certainly not unheard of for women to work, they tended to be those who needed working-class jobs for the money more than women of Harriet and Mildred’s backgrounds. Harriet became a CEO by chance, and she often faced patronizing attitudes from men in publishing who were not ready to accept her in their midst; nevertheless, she pushed on. Mildred got her lucky break in the way so many women did. When the newsroom of the Toledo Times was emptied of reporters by overseas deployments during World War II, the paper hired her with the promise that as soon as the men were back, she’d be gone. Instead, she stayed put for more than fifty years, proving herself time and time again.

Harriet and Mildred’s letters to each other, and to their friends and colleagues in the years when their children were young (Mildred had a daughter in 1938), show the enormous strains and challenges they faced as working women, as well as the intricate mechanisms that kept the Stratemeyer Syndicate and its roster of star characters running smoothly— or sometimes not so smoothly—over the years. Without Harriet and Mildred’s struggles in the real world, Nancy’s fictional, sometimes fantastical ones would not be nearly as vivid. Like her writers, the girl sleuth continually faces down conventional wisdom to get to the bottom of a conundrum, and like them she does it with elegance and verve. These letters provide a fascinating window into the development of one of America’s most-loved pop icons, and also attest to the great character and innovative spirit of the two women who shaped her, without whom the Nancy Drew we’ve known and loved for so long would not exist.

The Archives Connection
The research for Girl Sleuth: Nancy Drew and the Women Who Created Her (Harcourt, 2005), my book on which this article is based, was done in several archives. Paramount among them was the Stratemeyer Syndicate records (1832–1984), housed in the Rare Books and Manuscripts Collection of the New York Public Library. This trove of 375 boxes details not only the inner workings of the company, but the years before Edward Stratemeyer founded it, when he was working as a dime novel writer and editor. His early writings are there, as well as his literary account books––which note, with fatherly pride, the arrival of his firstborn child, Harriet, in December, 1892. Many of the illustrations in Girl Sleuth came from this collection, and for the book’s narrative I drew heavily from its vast selection of correspondence between Harriet Stratemeyer Adams and Mildred Wirt Benson, as well as between Harriet and her editors.

I also did research at the University of Iowa Women’s Archives, where I looked at the Mildred A. Wirt Benson Papers and other memorabilia donated to the collection by Iowa women. These archives were a fascinating source of information about the atmosphere on campus during Mildred’s years there in the 1920s and about the historic founding of the university’s Journalism School, which she attended. I also used the Wellesley College Archives and the Beinecke Library at Yale, which houses another small collection of papers concerning the Stratemeyer Syndicate.