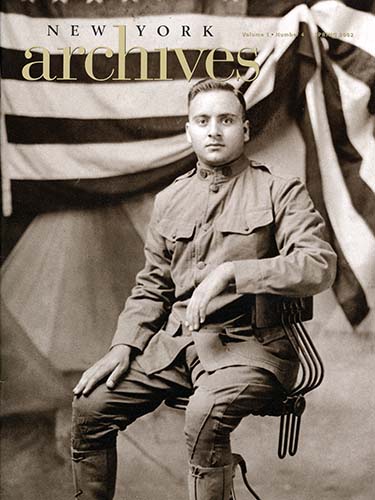 -225th Anniversary of the New York Constitution-
New York's First Constitution: Sketching a Map for Becoming American
Edward Countryman
The 1777 document outlines the possibilities and problems for the nascent state

-Centenary of Thomas E. Dewey's Birth-
Gangbuster in the Governor's Office
Richard Norton Smith
Recapturing a time when the "Scourge of Racketeers" governed the Empire State

Fingerprints: An Archival Whodunit
Simon Cole
St. Louis, Chicago, Albany, and assorted citizens vie to be the "first" to use fingerprints

Gathering the Voices of Freedom: The New York State Veteran Oral History Program
Michael Aikey
Recording the experiences of the men and women who served their state and country

-50th Anniversary of the Landmark Case-
Freedom of the Screen: Joseph Burstyn and The Miracle
Laura Wittern Keller
A Polish immigrant challenges New York's film censorship in the Supreme Court

Freedom of the Screen: Joseph Burstyn and The Miracle

In 1915, when the film industry seemed to pose a threat to morality, the Supreme Court denied that films deserved the First Amendment free speech and press guarantees that we take for granted today. That case, Mutual Films v. Ohio, stood as precedent for thirty-seven years. But 2002 marks the fiftieth anniversary of another landmark Supreme Court decision that turned the tide of film censorship in America.

Joseph Burstyn, a Polish immigrant and film importer, was an unintentional yet unrelenting advocate of freedom of the screen who took on the seemingly indestructible Mutual precedent. I first came across Burstyn's story at the New York State Archives while researching New York's film censorship bureaucracy. From 1921 until 1965, New York State censored all films shown commercially. (The State Archives now houses 53,000 film scripts scrutinized during those years.). The censorship was done by the Motion Picture Division, which became a part of the State Education Department in 1927. While Joseph Burstyn's name appears in several of the division's archives as the importer of such acclaimed films as Paisan, The Bicycle Thief, and Open City, the film that would make him a civil libertarian was The Miracle, a forty-minute Italian drama about man's inhumanity to man. In this short film directed by Roberto Rossellini, Anna Magnani plays a Catholic peasant who believes that St. Joseph has fathered her child.

Packaging The Miracle with two other short films, Burstyn submitted the trilogy, called Ways of Love, to the New York censors in 1950, received an exhibition license, and prepared for a profitable run in New York City. However, City License Commissioner Edward T. McCaffrey, prodded by the Catholic Legion of Decency (the film-rating and -censoring agency of the Church), objected to the movie, calling it "officially and personally blasphemous." He threatened the theater's license unless it dropped The Miracle. Burstyn, who passionately believed in the value of the film, decided to challenge the license commissioner's authority in court.

The American Civil Liberties Union, which had been waiting for a film censorship test case and was a frequent adversary of the Legion of Decency, sensed promise in The Miracle and offered legal assistance. The New York Supreme Court agreed with Burstyn that the license commissioner had overstepped his bounds and granted an injunction, opening the screens of New York to The Miracle.

Just two days after the film's reinstatement, the immensely powerful Francis Cardinal Spellman proscribed all American Catholics from viewing The Miracle and activated the Legion of Decency's most potent weapon, a boycott. That evening pickets barricaded the theater with signs reading "Don't enter that cesspool!" and "Don't look at that filth!" The situation grew uglier each night, as the picketers grew to two hundred strong. The Board of Regents, reporting "hundreds" of complaints about The Miracle and facing immense political pressure, revoked the film's license.

The ACLU was ready for a showdown, and The Miracle seemed the perfect test case. First, it was an artistic film, named by the New York City Film Critics as the best foreign film of 1950 and backed by a well-respected importer. Second, threatening legislation had recently been introduced in Congress that would certify all film actors, producers, and directors with licenses that were rescindable for "moral turpitude," so time was growing short for a decisive judicial curb on the censors. Third, a test in New York presented maximum potential, since many other states without censors followed New York's pronouncements. Florida, for example, refused exhibition, at least by statute, to any film that had not passed either the National Board of Review or New York's Motion Picture Division. Fourth, the Supreme Court had dropped a hint in an anti-trust case against Paramount two years before that it might be ready to revisit the film censorship issue.

Finally, The Miracle presented two solid constitutional issues: freedom of speech, and—because it had been censored as "sacrilegious"—separation of church and state. It was the right case to test the constitutionality of censorship: a fine film, with a principled distributor and a highly publicized confrontation in the background, and a healthy dose of church-state controversy thrown in for good measure.

Burstyn lost in both the New York Supreme Court and the Court of Appeals. The state successfully argued that The Miracle was "sacrilegious" and that "everyone knows what is meant by this term." Despite what seems to be, by today's standards, a strong case by Burstyn that censorship of The Miracle violated the First Amendment, state courts in 1951 were reluctant to overturn administrative decisions of state agencies. And New York courts preferred to avoid constitutional questions altogether.

Burstyn's last recourse was the Supreme Court. To convince the justices to hear the case, Burstyn's lawyer, Ephraim London, successfully asserted that New York's statute was too vague, violated due process, and breached separation of church and state. The long-anticipated showdown between the ACLU and the Legion of Decency was finally at hand.

The result was a unanimous decision in 1952 that reversed the tide of film censorship by overturning the thirty-seven-year stranglehold of the Mutual decision. For the first time, the Court extended "free speech and free press guaranty of the First and Fourteenth Amendments" to films. However, the decision also stated that "since the term 'sacrilegious' is the sole standard under attack here, it is not necessary for us to decide whether a state may censor motion pictures under a clearly drawn statute...". Thus contemporary commentators and historians tend to see Burstyn v. Wilson as a letdown, since the Court refused to throw the knockout blow that would have overturned censorship once and for all. However, it is not unusual for the Supreme Court to decide cases on the narrowest constitutional grounds, and historians have overlooked a significant part of the opinion: the Burstyn decision completely reversed the direction of censorship by placing the burden on the censors to prove the necessity of any limitation imposed. By extending First Amendment rights to film, the decision opened the door for further challenges. And it signaled the beginning of the end of the Legion of Decency's influence on the film industry.

Why would an independent film importer take on the censorship system of the 1950s? Burstyn explained at a victory party shortly after the decision that "every time I had to submit a film for censorship, I felt that I was in an illegitimate business and that being in this business was a crime.it was about time to try to restore a little dignity.". The ACLU gave Burstyn full credit for the victory, saying that "the motion picture industry with all its money couldn't accomplish what [he].did."

Sadly, Burstyn did not live to see film censorship ended in New York. He died the year after his Supreme Court victory. His friend, the film critic Bosley Crowther, eulogized him in the New York Times: "Though Mr. Burstyn is no longer here to see it done, the case he singly and bravely carried may yet spearhead full freedom for the screen." It did. By 1965, succeeding Supreme Court decisions based on Burstyn v. Wilson had so emasculated film censorship statutes that every censoring state finally surrendered.

One of the largest film script collections in the world is at the New York State Archives in Albany. Stored there are case files for 73,000 films that the Motion Picture Division reviewed for licensing between 1921 and 1965, including 53,000 movie scripts. On average, the state banned six to eight films per year, and ordered another ten percent changed before granting licenses. Today, archivists receive thirty to forty calls a week about the script collection: from video distributors seeking scripts for foreign-language dubbing, from scholars studying film and censorship, and from movie buffs around the world. To read about the collection, search for a script, or print out a Copy Request Form, go to www.archives.nysed.gov and click on "Film Scripts."