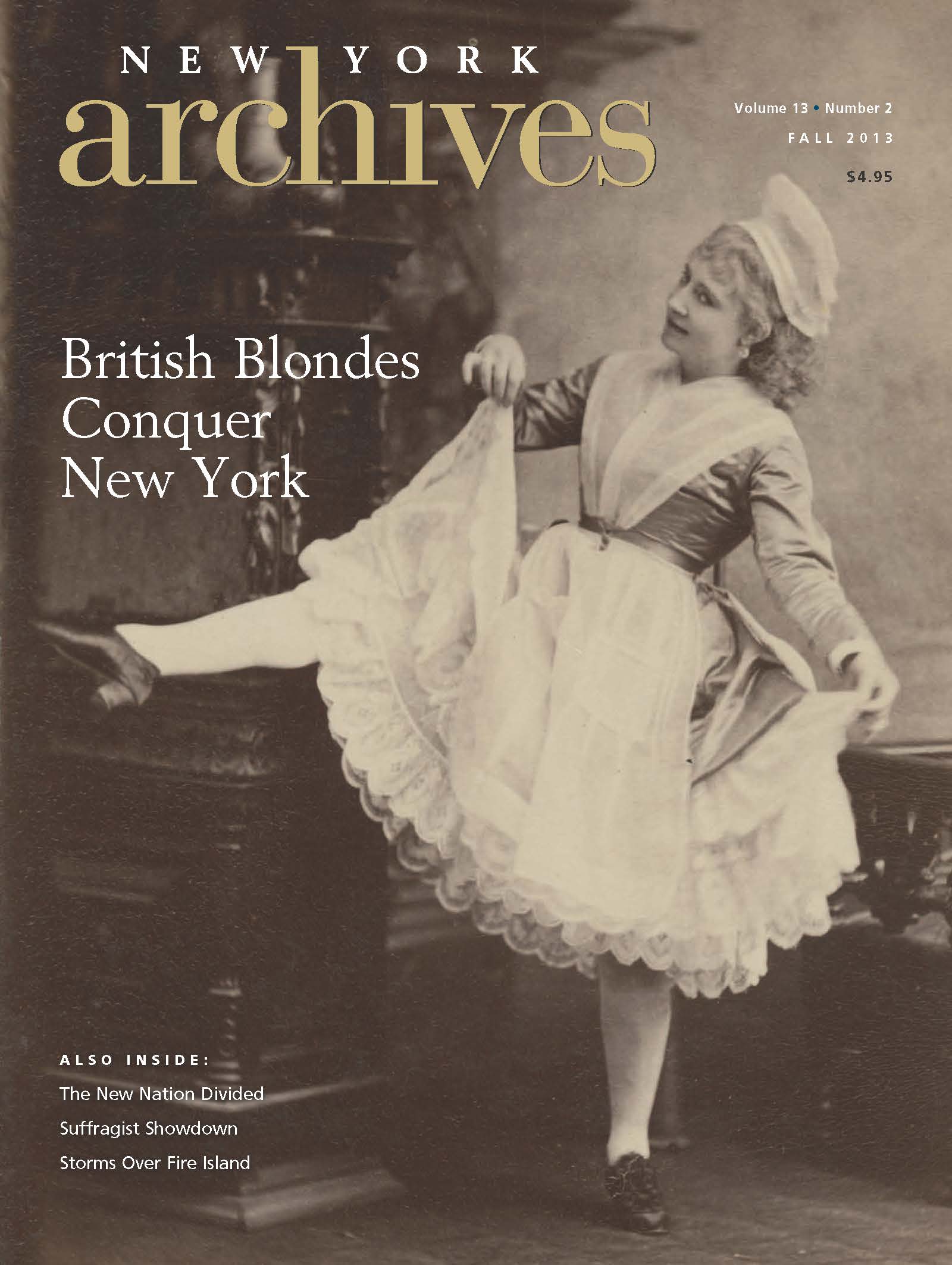 The Civil War of 1812
Alan Taylor
Subject vs. citizen was still the issue in America’s second war.

Year of the British Blondes
Susan Ingalls Lewis and Morgan Gwenwald
Once the Queen of Burlesque had come to town, Gilded Age New York was never the same.

Like the Revolution, the War of 1812 was a civil war between competing visions of America, waged by the British and the new Americans in the hearts and minds of both sides.

In the fall of 1812, Ned Myers was a nineteen-year-old sailor in a group marching from New York City across New York State to Lake Ontario. They went to join the American fleet under construction for an invasion of British Canada. But Myers felt the enemy long before he reached the Canadian border, for the sailors marched into an upstate village where the inhabitants bitterly opposed the war. On a trumped-up charge, the villagers arrested the officers in command of Myers’s party, only to release them when the sailors threatened to burn the village. Moving on to Oswego Falls and caught in a downpour, the sailors sought refuge for the night in a large barn. That night, as Myers recalled, they “caught the owner coming about with a lantern to set fire to the barn, and we carried him down to a boat, and lashed him there until morning, letting the rain wash all the combustible matter out of him.” In the War of 1812, Myers had to fight against Americans as well as Britons.

During the following summer of 1813, Myers served on an American armed schooner on Lake Ontario. When a British warship captured that schooner, Myers dreaded the discovery of his secret: that he had been born a British subject in Quebec in 1793. Abandoned by his father, a German officer serving in the Royal Army, Myers grew up in Halifax, the capital of Nova Scotia: another British colony. At age eleven, he ran away to New York City to become a sailor. Rejecting his birth as a British subject, Myers chose to become an American citizen: “America was, and ever has been, the country of my choice, and while yet a child I may say I decided for myself to sail under the American flag; and if my father had a right to make an Englishman of me by taking service under the English crown, I think I had a right to make myself what I pleased when he left me.”

But the British insisted that every “natural born subject” remained so for life. Before the war, Myers had repeatedly and narrowly dodged the Royal Navy press gangs, which stopped and boarded American ships in search of any mariner who seemed British. And once the war with America began, British officers treated former subjects as traitors if captured while fighting in the enemy’s service. As a British prisoner, Myers feared for his life.

In September at Quebec, a press gang boarded his prison ship to seize Myers and seven other prisoners. Myers insisted that five of them were Americans by birth, but a British naval officer “pronounced us all Englishmen” obliged to serve in the Royal Navy or face trial and hanging as traitors. All eight refused to serve on a warship, but they agreed to work on an unarmed transport vessel. They sailed for Bermuda, where naval officers again impressed them to serve on a warship, which threatened, Myers insisted, “to swallow us all in the enormous maw of the British navy.” When the captives refused, they faced a court-martial. Unable to prove that the sailors were subjects, the British transferred them to a prison at Halifax, where Myers worried that the locals would remember and recognize him.

The War of 1812 pivoted on the contentious boundary between the king’s subjects and the republic’s citizens. In the republic, an immigrant chose citizenship—in stark contrast to a British subject, whose status remained defined by birth. That distinction derived from the American Revolution, when the rebelling colonists became republican citizens by rejecting their pastas subjects. An immigrant reiterated that revolution by seeking citizenship and forsaking the status of the king’s subject. But the British denied that the Americans could convert a subject into a citizen by naturalization. By seizing supposed subjects from merchant ships, the Royal Navy threatened to reduce American sailors and commerce to a quasi-colonial status, for every British impressment was an act of counter-revolution. By resisting impressment and declaring war, the Americans defended their revolution.

War raised the stakes in the conflict over subjects and citizens. By converting prisoners or hanging a few as deserters, the British bolstered their contention that any natural-born subject owed allegiance for life, no matter where he went or what nation pretended to naturalize him. Returning the favor, the republic’s officers sought to entice captive Britons to enter the American service, thereby re-enacting the revolution on an individual scale. Because the line between citizen and subject was so contested, rival commanders promoted the desertion of enemy soldiers, the defection of prisoners, and the subversion of civilians in occupied regions. As much as on any battlefield, the British and the Americans waged the War of 1812 in the hearts and minds of Ned Myers and his fellow soldiers and sailors on both sides.

After the revolution, the British Empire and the American republic had remained uneasy neighbors in North America. Upper Canada (now Ontario) served as a haven for thousands of American Loyalists expelled by the Patriot victory in the revolution. By building a Loyalist society, these refugees hoped to set an example of superior stability and prosperity meant to demonstrate the folly of the republican experiment in the United States. (The revolution generated a higher proportion of political refugees than did the French Revolution: historian Maya Jasanoff calculates that 1 in 40 colonists became a refugee, compared to 1 in 200 French during their revolutionary upheaval.) The Loyalists in Canada did not believe that their empire had permanently lost the fight against the republican revolution.

Britons and Loyalists predicted that the republic inevitably would collapse into anarchy and civil war. Surely repentant Americans would then beg for readmission into the empire. With equal conviction, Americans insisted that nature destined their republic to dominate the continent. Eventually, they predicted, the Canadians would join the United States by rejecting the artificial rule of a foreign empire. Created by the revolution, the border between the republic and the empire seemed tenuous and temporary: destined to shift either north or south as one or the other collapsed.

Partisan divisions within the republic helped to provoke the war. After 1801, the dominant Republican Party challenged the British maritime policies as a threat to American sovereignty. But the Federalist minority party sympathized with Britain’s global struggle against the French empire led by the despot Napoleon Bonaparte. The Federalists also despised the Republicans as demagogues who pandered to the common people by weakening the national government. By 1812, the Republicans believed that the Federalists in New England were conspiring with the British to break up the union. And the Republicans accused the Loyalists in Canada of covertly assisting Indian attacks on frontier settlements. By invading Canada and defeating the British, the Republicans hoped to save the republic from a menacing convergence of internal and external enemies. Instead, the war alienated the Federalists, who preferred to smuggle with the British rather than to fight them.

As Myers found on his march to the front, the war divided Americans. Major Daniel McFarland insisted that the British were “engaged in the hellish project of creating a civil war” by promoting disaffection within the United States. In the polarized politics of the republic, Federalists denounced a war declared by the governing Republicans. A New Yorker concluded, “Between the two parties, a hostility existed little short of civil war.”

To win the war, the British and the Americans had to win the hearts and minds of civilians, both at home and on the front lines. Hampered by long supply lines, a short growing season, and sharp climactic swings, the rival armies could only sporadically come to grips in fixed battles. Commanders spent most of their time struggling to recruit, train, feed, clothe, motivate, and heal their soldiers or to retake and punish those who ran away. To succeed, the commanders needed cooperation from the civilians who raised the food, provided the recruits, wove the cloth, and gave haven to deserters. To woo Canadians, the American generals posed as liberators, but they failed to prevent their soldiers from plundering far and wide. And the British had no better luck restraining their own troops or their Indian allies, who looted the Niagara Valley, alienating the American civilians there.

The story of this borderland war illuminates the contrast and the contest between the republic and the empire in the wake of the revolution. Both American Republicans and Canadian Loyalists suspected that the continent was not big enough for their rival systems: republic and mixed constitution. One or the other would have to prevail in the house divided. Like the revolution, the War of 1812 was a civil war between competing visions of America: one still loyal to the empire, and the other defined by its republican revolution against that empire.

But neither side would reap what it expected from the war. Frustrated in their fantasies of smashing the other, the Loyalists and the republican Americans had to learn how to share the continent and to call coexistence victory. By ending in a standoff, and concluding the revolution, the War of 1812 had the greatest of consequences for North America.