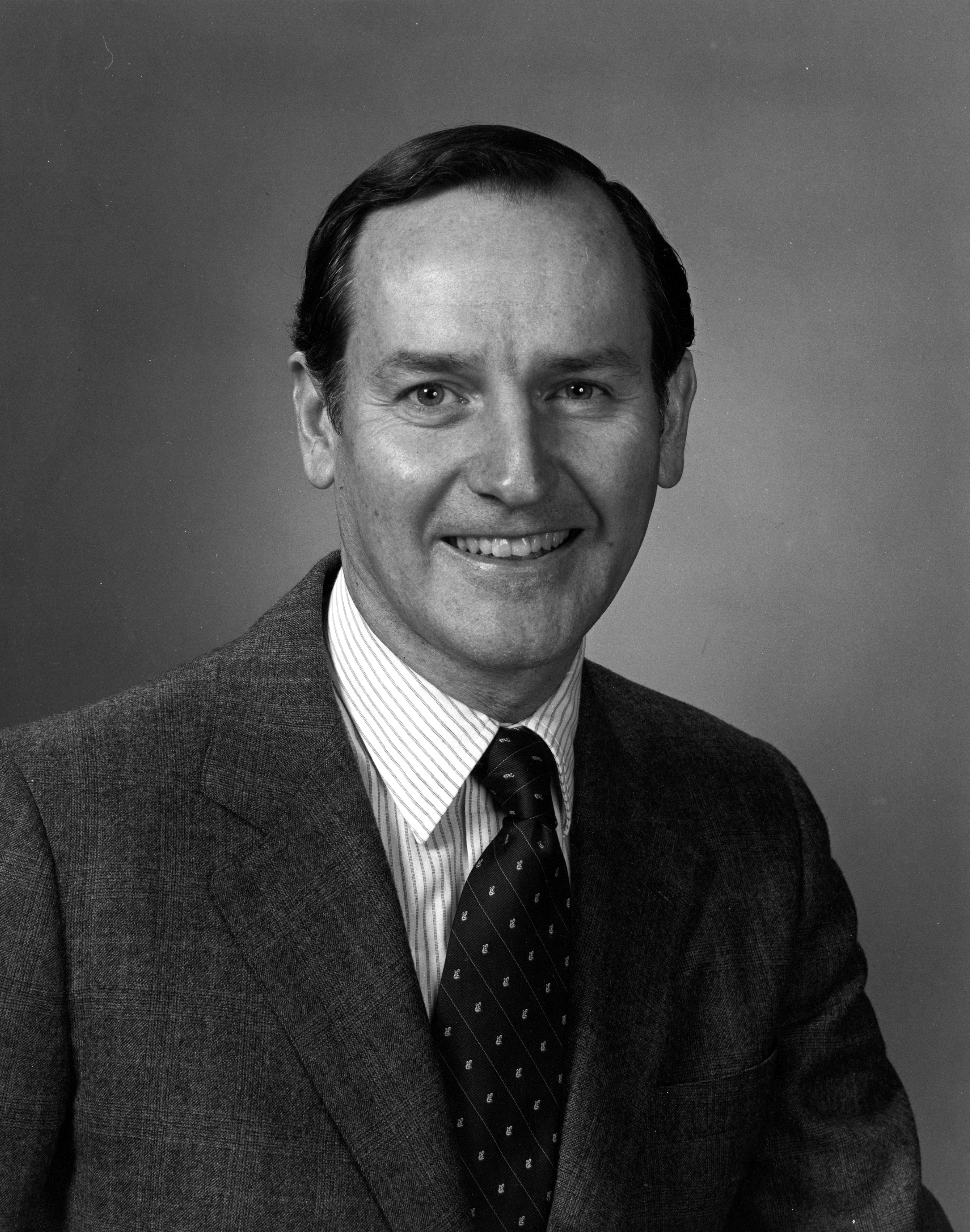 Gordon MacKay Ambach was born on November 10, 1934 in Providence, Rhode Island. At the time of this interview, he was seventy-eight years old.

Gordon Ambach was the second of two sons born to Ethel (nee Repass) and Russell William Ambach. Ambach, literally translated from the German “am Bach,” means “at the brook.” Gordon’s great-grandfather, Frank Julius Ambach, had immigrated from Germany in 1855 and settled in Enfield, Massachusetts. Gordon’s grandfather, William Ambach moved with his wife, Lena (nee Loomis) Ambach, to Woonsocket, Rhode Island, where he began a successful business manufacturing woolen textiles.

The Ambach family valued and encouraged education. Gordon’s father, Russell, attended the public schools of Woonsocket and excelled in academics, athletics, and the piano. He went on to graduate from MIT as a civil engineer and work in coal and energy production. During World War II, he worked on fuel injection aircraft engines in Springfield, MA and later in Ridgewood, NJ at Patterson Airforce Base to test the engines.

Education was also a central value and pursuit in Gordon’s maternal family. His  grandfather, Robert Elias Repass, son of a Methodist minister, was of French Huguenot-Swiss descent. He was born in southwest Virginia where Repass ancestors had worked as teachers, pastors and preachers since 1788. Robert graduated from Emory and Henry College and taught for a few years.  Gordon’s grandmother, Julia MacKay (nee Kibler) Repass, of English-Scotch descent, was born in the Shenandoah Valley in Virginia. The Repass grandparents married in 1895 and, influenced by depressed economic conditions in Virginia and by the Gold Rush, moved west to homestead land in the Black Hills of South Dakota. Gordon’s mother, Ethel Repass, born in 1900, and her two older siblings spent their youth on a ranch in Nemo, South Dakota, where the family ran a successful business in winter selling timber to the burgeoning mining industry and the railroads. In 1912 the family sold the ranch and moved to Spearfish, South Dakota for better educational opportunities for the children.

After graduating from high school in Spearfish, Gordon’s mother Ethel received her B.S. in Education from Black Hills Teachers’ College. In 1923 she moved to Glencoe, Illinois to teach. After several years, she went on to attend the University of Chicago’s School of Education for a Master’s degree.

In 1929, she met Russell Ambach in Chicago on a blind date and they married on December 20, 1929. Seizing an unusual Depression-era opportunity, the young couple left for the USSR with other American engineers and their families in early January 1930. Interestingly, there were no diplomatic relations between the U.S. and Russia at the time. Russell worked in Kharkov, Ukraine on a five-year coal mining plan and was outspoken in criticism of the Soviet system. The Ambachs returned to Illinois in time for the birth of Gordon’s older brother, Dwight, in January 1931. They lived briefly in Woonsocket, Rhode Island near family, but moved to Providence, Rhode Island when Russell was hired by the Atlantic Refining Company.

After a few years at home with young Gordon and Dwight, Ethel Ambach returned to her lifelong interest in early childhood education. In Providence, she taught pre-school through second grade at the Mary C. Wheeler School and became the head administrator for the lower school. After she and Russell moved to Brookline, Massachusetts while Gordon was at Yale, she taught elementary grades at the Milton Academy through the late 1960s.

Gordon and Dwight received their primary and secondary educations in the public schools of Providence, Rhode Island and, during World War II, Springfield, Massachusetts and Ridgewood, New Jersey. Gordon attended Hope Street High School and graduated in 1952. He cites his experience in the public school system as especially positive in terms of academic, athletic, and leadership opportunities. He was president of his class for three years and captain of the varsity basketball and tennis teams. In addition, the student body at Gordon’s high school was remarkably integrated for those days, which led to greater exposure and tolerance among a diverse population.

A successful young student, Gordon was accepted to both Harvard and Yale, the only two colleges to which he applied. He selected Yale for its engineering program. After a year, his interests led him to American and Liberal Studies and, in 1956, he earned his Bachelor’s degree in American Studies, with a specific interest in education policy and administration.

As a scholarship recipient at Yale, Gordon came to know Homer D. Babbidge, the Director of Student Financial Aid. It was Homer who encouraged Gordon to intern in education policy and administration at the U.S. Office of Education in Washington D.C.,   during the summer of 1956. Gordon cites this experience as pivotal in shaping his interest and future opportunities in the field of federal education policy.

In 1956-57, Gordon attended Harvard Graduate School of Education where he earned a Master of Arts in Teaching. Upon finishing his degree, Gordon enlisted in the U.S. Army. He spent six months on active duty at Fort Dix, New Jersey, and the next five and a half years in various Reserve units as an Education Specialist.

During the summers of 1958 and 1959, Gordon returned to intern at the U.S. Office of Education. Under President Eisenhower, the period saw great bipartisan support for education, as reflected in the passage on NDEA (National Defense Education Act), an effort to shore up U.S. education and research achievements, in response to the Soviets’ launching of Sputnik I and Sputnik II.

In 1958, the Dean of Education at Harvard was Frank Keppel (later U.S. Commissioner of Education under President Johnson). He invited Gordon back to Harvard to serve as his administrative assistant for nine months.

After completing his work with Frank Keppel, Gordon secured a teaching position at the Wheatley School in Long Island, New York. At the time, the Wheatley School was an innovative public school, with over seventy percent of its faculty holding doctoral degrees, and its principal, a Harvard graduate. For the next three years starting in September 1958, he taught seventh and eighth grade Social Studies, as well as coached tennis and basketball.

After Kennedy’s election to the U.S. presidency in 1960, Gordon set his sights on Washington. In 1961 he obtained a civil service position with the U.S. Office of Education as an Assistant Program Planning Officer and later as an Assistant Legislative Specialist working with Assistant Commissioners Peter Muirhead and Samuel Halperin.

During the Kennedy administration no significant federal education legislation was passed due to controversy over funding for segregated and parochial schools. When Lyndon B. Johnson assumed the presidency after President Kennedy’s assassination in 1963, federal education legislation saw rapid passage. President Johnson did not want the country to think the federal government was crippled, and within two weeks the Vocational Education Act and the Higher Education Facilities Act were passed.

With the passage of these acts, the focus became their implementation. Frank Keppel, now the U.S. Commissioner of Education, appointed Gordon to work with the Higher Education Facilities Task Force which would establish state offices of education that would administer the new programs. This formative experience inspired Gordon’s lifelong involvement at the intersection of federal programs and individual states.

1964 led Gordon back to Harvard to pursue a Doctor of Education in the Administrative Career Program. Not surprisingly, the topic of his doctoral research concerned the implementation of federal education policy across the nation.  Along with his studies, Gordon also worked part time through 1965 as an advisor to Arthur Gartland, a liberal member of the Boston School Committee, at a time fraught with controversy over school desegregation and bussing.

Gordon’s doctoral work soon took a detour, however. With the release of the Coleman Report Equality of Educational Opportunity in 1966, Daniel Patrick Moynihan invited Gordon and Mike Smith (also interviewed for this project), to manage a faculty seminar at Harvard which would re-analyze the report’s data. In this year, Gordon was also a member of the Editorial Board of the Harvard Educational Review.

Gordon completed his course work and his qualifying paper and was awarded a Certificate of Advanced Study (CAS) by Harvard in 1966. Gordon never took time from his work in ensuing years to write a final paper for the Ed.D.

In 1967, Gordon was invited by Jim Allen, then Commissioner of Education for New York State, to apply for a position with the Commissioner’s office, as Special Assistant to the Commissioner for Long Range Planning. The position would entail the shaping and administration of education policy for the State of New York.

Gordon accepted the position, and what he thought initially would be a three-year stint turned into twenty years of service. In 1970, at the age of thirty-six, Gordon became New York’s Executive Deputy Commissioner of Education, in charge of 4000 employees. In 1977, he applied for and was chosen to become the Commissioner of Education for the State of New York, a position he held until 1987.

As Commissioner, he developed the Regents Action Plan, a major comprehensive plan of education reform with the goal to raise learning standards statewide. The Action Plan increased the requirements for graduation for students in terms of numbers of years of mathematics, science, history, music, art, and foreign language study. The Action Plan was an early forerunner of the nation’s Reform Movement.

Across his varying positions, Gordon became deeply involved in how individual states organized and advocated the federal level. As Commissioner of Education he was a member of the Council of Chief State School Officers (CCSSO) in Washington, D.C. where he held numerous positions including serving as President. In 1987 after ten years as New York’s Commissioner of Education, he took a position as the Executive Director of CCSSO and continued his deep involvement with organizing and advocating for the states around issues of educational policy until his retirement in 2001.

While with CCSSO, he served as U.S. Representative to the International Association for the Evaluation of Educational Achievement (IEA) which studied cross-national comparisons of student achievement and the variety of educational practice in different nations.

In retirement, Gordon continued to serve on a number of boards, including the Wallace Foundation, the Smithsonian Institution, the New Haven Symphony Orchestra, the Newspaper Association of America Foundation, the Education Board of the National Academy of Sciences, and the Center for Naval Analysis.

Gordon married Lucy Emory of New York City in 1963. Together they had three children. Gordon Ambach died in his home in New Haven, Connecticut on May 25, 2018 at the age of 83.