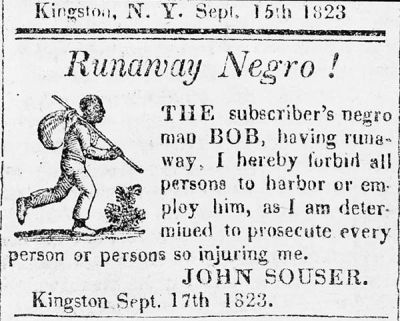 Compelling Question: Did African Americans struggle for their freedom in New York?

Supporting Question 1: What were the living conditions for a slave in New York before and immediately after the American Revolution?

Using evidence from the documents, write a paragraph describing the conditions of a slave in New York during the 1700s.

Last Will and Testament of Rachel Bogardus

Supporting Question 2: How did slaves resist their conditions in New York?

Using evidence from the documents, discuss the ways in which slaves tried to resist their conditions and how owners tried to prevent slave resistance.

Supporting Question 3: How and when did slavery end in New York?

Create a timeline depicting the end of slavery in New York.

Overseer of the Poor Record

Argument: Write an argumentative Essay in which you answer the compelling question using evidence from the documents. Be sure to describe the life of slaves in New York during the colonial period and early national period, explain the ways slaves resisted their condition, and evaluate the way in which slaves gained their freedom in New York.

Is there a group in your local community that has not been given equal rights and freedoms? Brainstorm reasons why these rights and/or freedoms are restricted and how you might take action to change these restrictions.